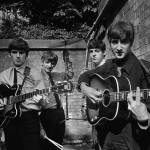 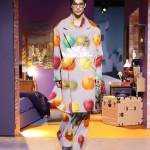 The inspiration behind this collection grew from the idea of a character that is resilient, defensive and self-protective. An aesthetic of armour, a navigation in an increasingly hostile and weathering environment.

Classic military and leather biker looks – as well as more fantastical sources such as the heroine of Nausicaä of the Valley of the Wind – serve as the inspirational figures to construct a subtle rendering of a contemporary romantic fighter.

The silhouettes of the season emphasise a kind of warped rigidity, as well as a contrast between sternness and recklessness. Chunky forearms and calves illustrate warrior-like outerwear, contrasting with some of the other more body fitted pieces. This season also marks a continuation to explore gender neutrality within menswear.

The collection also explores the potential of detachable pieces, such as detachable long coats and pants that transform into more dramatic, colossal and vertical silhouettes.

ROSALÍA AND KIDSUPER FIRED UP THE LOUIS VUITTON SHOW