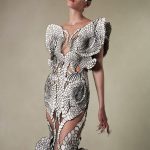 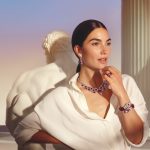 The title references Cedric Price’s “Fun Palace,” circa 1961. “Fun Palace” was an idea for a London-based convention center, formulated to represent a “university of the streets.” It was to provide a flexible framework for programmable spaces dedicated to creativity. Though the premise was never built, Off-White’s founder and creative director Virgil Abloh was influenced by the modernity and modularity of Price’s thinking—and its likening, in some ways, to the classic American shopping mall. In turn, “Laboratory of Fun” takes an aesthetically linear and structure-driven approach, harkening back to Abloh’s formal training as an architect. Precision silhouettes and mostly-monochrome looks stand out; a notable reduction in graphic elements and motifs begins to symbolize a new sense of clarity at the house. Furthermore, the designer Dieter Rams’ portfolio for the German consumer goods company Braun served as inspiration. As a result, “Laboratory of Fun” is collectively pared-back, measured and exacting—yet it is far from minimal. It’s the sartorial reflection of a methodical builder, working at their drafting table.

“This collection speaks in part to my roots as an architect,” says Abloh. “It signifies an evolution of the Off-White™ approach, continuing to blur the lines between creative disciplines and inspirations. It’s about pushing the aesthetic forward into a novel, highly explorable space.”

Both the womenswear and menswear components are anchored in a color palette drawn from Rams’ oeuvre at Braun: shades of gray, neutrals, and slightly attenuated mid-century-style oranges, blues and yellows are most visible.

Overall, the collection features elongated tailoring, including square-shouldered coat-dresses with extended—almost to the hip—single-button closures. Outsize cable-knits are stained with indigo dye; additional tailored blazers have sharp-cut shoulders and single-creased sleeves. Trouser and Bermuda shapes are boxy and roomy, while outerwear and select evening pieces are sewn with new Dieter Rams press studs (which have been manufactured for Off-White™ by COBRAX). A halter top evening dress depicts an adapted rendering of stair cladding and gangways; it’s a direct representation of space, movement, and the intersection of ergonomic engineering and clothes-making.

The accessories narrative at “Laboratory of Fun” revolves around spacious carriers, often with colorful, contrasting chain straps. Chunky boots and needle-thin heels bring dynamism to the soft rigor of the clothing, while polychrome sunglasses impart an eccentric touch.

“Laboratory of Fun” was presented in a streaming format on July 4 via Off-White’s newly redesigned website—it will remain viewable online over the next few months. The collection reveal also coincided with the opening of Off-White’s Paris flagship store, located at the intersection of Rue de Castiglione and Rue du Mont Thabor near Place Vendôme. The multi-level boutique, which features not only retail but also a café, exhibition spaces, and more, was designed in collaboration between Abloh and AMO, the think-tank branch of the architecture firm OMA.

On July 2nd and 3rd, Off-White™ Paris hosted “Imaginary FM,” a twist on a radio station that aired ahead of the Fall/Winter 2021 collection reveal on July 4th. “Imaginary FM” marked an evolution of Off-White’s “Imaginary TV” concept, in which multi-hyphenate creatives and individuals showcased and discussed various topics, music styles, work, and more, across a boundary-less medium. “Imaginary FM” saw 20 performances and segments over July 2nd and July 3rd, with a kick off by Tatyana Jane, appearances by Trinice McNally (I Support Black Women) and Jaimee Swift (Black Women Radicals), Bonnie Banane, Yard, Aleqs Notal, La Créole and collectives of creatives bringing their own style to Off-White’s airwaves.

To bring the imaginary to life, Off-White™ tapped Rinse France as the primary partner on “Imaginary FM.” Paris and London-based, Rinse is not only a radio station, but also a multi-activity hub that works in a 360-degree manner to support cultures and thinkers it believes in.

As part of the line up, the Grammy-winning artist M.I.A. gave guests a full performance of some of her most beloved songs, including Borders, Hip hop -Born free, Yala Warrior Princess and Paper Planes in celebration of “Laboratory of Fun.” The production featured Tamil dancers, and the singer wore Off-White™.