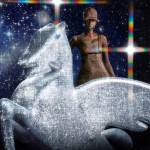 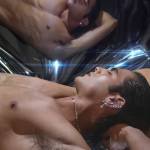 On Friday 9 December, the Van Gogh Museum together with Amber Vineyard – Mother of House of Vineyard – presents Golden Femme: an evening of performances, workshops and music. Lethal female figures from the Dutch ballroom scene come together to bring to life the sirens from Gustav Klimt’s golden paintings. Severed heads of male oppressors are reworked into accessories for the catwalk, participants learn to walk the runway like divas and special performances pay tribute to the strong women in Gustav Klimt’s work.

Sexuality
In Vienna around 1900, Gustav Klimt (1862-1918) was considered one of the all-time greats. With his explicit depiction of female sexuality and autonomy, he kicked against the prevailing conventions of his time. The way he portrayed his subjects – mostly women from marginalised communities, such as Jewish ones – was downright revolutionary. Many women in Klimt’s work exude self-assurance, with ownership over their own bodies and sexuality. One of the highlights of the exhibition Golden Boy Gustav Klimt is the world-famous Judith (1901): the very first work in which Klimt incorporated gold. Judith is based on the eponymous Jewish heroine who cut off the head of her male oppressor to free her people.

Ballroom
Empowerment and fighting conventions are also the pillars on which ballroom was founded. Ballroom culture originated in the 1970s in New York’s Harlem district. LGBTQIA+ people of colour often face exclusion and violence both outside and inside the gay community. They organise balls where they take centre stage dressed in extravagant robes, ball gowns and uniforms. With their vogueing, they imitate poses of fashion models and trump each other theatrically. Ballroom culture became famous to the general public thanks to the documentary Paris is Burning (1990) and the Netflix hit series Pose (2018-2021). Since 2013, ballroom has been flourishing in the Netherlands under the wings of pioneer Amber Vineyard, the ‘Mother’ of House of Vineyard and Vineyard World.

Revenge
Klimt’s subversiveness and the ballroom culture of the queer community of colour come together at the Van Gogh Museum during Golden Femme on Friday 9 December. Several ‘heads’ will be reworked into accessories for the catwalk. In the museum’s auditorium, participants will learn to walk on the runway like real divas and the exhibition space will feature special performances by the House of Vineyard inspired by the work of Gustav Klimt. Naturally, the exhibition Golden Boy Gustav Klimt can be visited during the evening.

ETRO UNVEILS AN EXCLUSIVE PREVIEWS OF THE SS23 COLLECTION