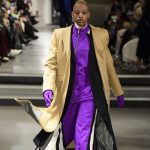 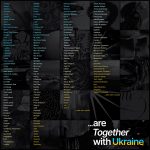 Still frame of a moment, frozen in a monochrome sign that pervades everything. The Creative Director: Pierpaolo Piccioli conceives the new Valentino collection following the experimental urge of a radical gesture. Stripping the palette down to a single hue, relentlessly, he does more with less, maximizing expressive possibilities in the apparent lack of possibilities.

Pink is rampant everywhere, in a total estrangement that includes the set and that is reiterated by the occasional total black and total white intermissions. Pink as a manifestation of the unconscious and liberation from the need for realism. The accumulation of pink elements is such as to eliminate the visual shock to bring out, together, the unique character of the person, expressed by the face and the eyes, and the work on the pieces of clothing: the signs that shape them into a silhouette, the textures that give them consistency, the decorations that are part of the construction. The subtraction is, in fact, amplification, magnifying both the humans and the clothing. A variety of bodies, attitudes, and physicalities, enhanced by the monochromatic palette, bring such a vision to life.

The same frankness of the single note of color runs through the shapes: large volumes sculpted on the body by geometric tucks that highlight the gesture of tightening, sensual s-shaped lines, very short hemlines, cinched waists. Bows, ruffles, petals, lace, and embroideries swarm everywhere. Shoes stand on massive platforms, which are pink too. The bags look like they were passed under a magnifying glass and subsequently altered: they grow in size, details included, or become tiny, closed by a single giant stud. Everything is touched by pink, in both the men’s and women’s wardrobes, even the finishes, and the hardware.

The pink-out is an experimental yet deeply human gesture that enhances individuality, capturing values and feelings. The shade of pink by Pierpaolo Piccioli, for which Valentino is collaborating with Pantone Color Institute to create a unique identity is individual and unrepeatable in itself.

VTMNTS speaks to all genders with their A22-23 COLLECTION