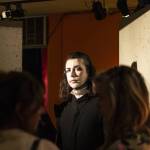 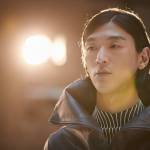 For many years, The Moulin Rouge has stood in Amsterdam’s Red Light district and welcomed a diverse crowd of sex  workers, misfits, partygoers and voyeurs. Yesterday, on the second day of AFW Edition 2022, the famous Sex Theater  lent its location to a night of fashion. For this special occasion, Dutch designer Duran Lantink brought his own clique  of performers to present the Steve Madden Fall/Winter 2022 collection in a way only Duran could have thought of.

In a cold and pitch-black corridor, the crowd gets cornered between the bouncer and glass displays of collection teasers;  a sure preview of what’s about to come. As we walk down the stairs, a piercing red laser follows our steps as we get  seated around a character crouched on stage with a mask and bra that shoot red light across the space. Intimate yet  disorienting, a sharp sound bounces off the walls. The show is about to begin when the music builds up and transitions  to a hostile sound that ticks away. The first performer ventures themselves around the pole, whilst their 13-inch heels  lit up red in sync with their moving limbs. Behind the DJ booth, a wall displays Steve Madden’s new collection in all  its glory, integrated with the décor of the club as if it’s always meant to be there.

The performance exhibited fashion  synonymous with sex. Blasting through the speakers, the two words alternated each other. Unsure of what’s about to  happen next, we soon realise we would be feasting on performances the whole night through. Part of the crew were  the legendary Virgen Maria, Christian Jav, Angel-Ho, Xiomara Virdó just to name a few; when Duran curates, he  makes sure to get the right people to do the job. Artist Be Be made everyone step aside, when they strutted through  the narrow hallway in nude lacquer ankle boots. “Some of us wear, well, shoes! Some of us wear, something, and  some people wear, you already know the answer, don’t you? Some people wear, Steve Madden!”. Their spoken word  performance absorbed the audience as they tried on every pair of Steve Madden’s that were neatly lined up on the  stage. As the night went on, mirror-like open toe stiletto’s, rhinestone pumps, and heeled creepers fuse itself with the  performers’ presence.

Steve Madden certainly took a risk when taking on Duran as a curator. In this case however, it paid off royally. In a setting  so obscure, the meaning of wearing Steve Madden all the sudden signified love, acceptance, a voice vouching for  the eccentrics, often misunderstood. Duran always manages to expand the scope of what fashion can be; layered and  influential beyond the cloth, the craft and the allure.