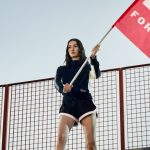 Kicking off 2022 with a boundary-breaking new collab, Ray-Ban Studios signs a groundbreaking star from the galaxy of transformative music to showcase a one-of-kind style from the vault: presenting The Julie-Dahlia, redesigned by Sevdaliza.

Observing the Iranian-Dutch artist’s journey of self-discovery through the eye of original style, this exclusive Ray-Ban Studios story follows Sevdaliza’s trailblazing ascent from a pro basketball career to critically acclaimed success as an icon of non-conformist expression. Now one of the world’s most popular artists, whose mesmerizing audiovisual experiences and Avant-pop-come-triphop tunes have earned millions of plays and sell-out tours, with the launch of her own record label Sevdaliza’s adventures into the crea- tive universe are set to go even higher. Starting with this exclusive Ray-Ban Studios partnership.

Empowered. Original. Creative: as she gives voice to the vision of the latest Ray-Ban Studios Campaign, Sevdaliza comes up close and personal with her audience, exposing the hushed narratives of gender and identity as she explores what it means to belong in diversity. Honoring both the individual and the community, she transcends stereotypes, sharing her own transformative experience through words, sounds and images that inspire us to find our own inner superhero and empower each other through freedom of express.

Sevdaliza is That Other Girl, The Suspended Kid, the one who is not afraid to speak her mind and sing her soul. And while her multi-faceted profile as a singer, songwriter, record producer, visual artist and director doesn’t fit into mainstream boxes, it does fit the Ray-Ban Studios’ concept of creative style that goes beyond appearances. Cue The Julie – Dahlia.

Balanced, yet edgy, unexpected, yet perfectly in tune, this paired-back metal icon frames Sevdaliza’s layered harmonies with enig- matic attitude. And almost like a voyeur, with its see-through shades this exclusive edition reveals the artist’s vision, synching with her minimal breakbeats and loaded orchestral layers to frame a genre-bending approach to style.

And true to form, the style of the campaign echoes her multi-form creations and their adaptation to catwalk, bigscreen and TV pro- ductions. Introduced by a series of exclusive teasers and talent shots that reveal the storytelling concept behind the partnership, the full campaign video is cut and built for dedicated activations across PR, social, e-comm and sales channels, in Ray-Ban stores and on Luxottica billboards. The exclusive 200-piece Limited Edition of the custom designed Julie-Dahlia with its dedicated packaging and QR code are now available for purchase on Ray-Ban.com and in select Ray-Ban stores.