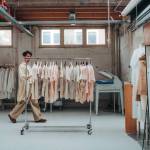 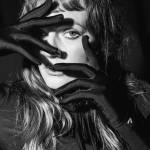 Vocal lover of analog cameras, the Chilean photographer living in Madrid reasserts her preference for the quotidian: be it in everyday food or her closest social circle. A good example of this tendency is her first photobook Helados (Ice cream) (Metalibro, 2020), in which she shows sculptures representing ice cream she has encountered in her travels in cities such as Madrid, Paris, Berlin and Barcelona.

She revisits this observation of the quotidian using photos about her private life in her new project: ‘Rocío [2008–2022] x ROCÍO AGUIRRE’. This is a photo book which shows an overview of her youth, which transcends the autobiography and becomes a generational archive.

Assembled from “a chest full of photos that were cataloged and organized in different configurations at different times”, the latest work of the photographer starts in Chile, traveling countless countries, portraying the young people who grew up under the shadow of the disenchantment of generation X.

The author didn’t escape this feeling, as she grew in a country traumatized by Pinochet’s military dictatorship, and was educated in a neoliberal family economy of middle-class survivalism, in which aspirations were going to private school, and you grew up in a culture of divorce and economic instability.

She collected visual mementos that were organized chronologically, by color, taste, memories or loved ones. The tough process of decision taking produced different versions worked as psychological therapy, and personal growth and development exercises.

Now published as a book, in a limited series of 500 copies, ‘Rocío [2008–2022] X ROCÍO AGUIRRE is a fascinating barrage of evocative images built out of memories, obsessions, work and imagination that are memorized in short episodes. An editorial practice that is built through a visual and narrative discourse, telling one or many stories, occupying its proper place, not necessarily engaging in dialogue, but inhabiting a succession of spaces and time in an orderly manner.

‘Rocío [2008-2022] X ROCÍO AGUIRRE’ is a hardcover book in red artificial leather and the photo of some shoes in the same color in a desert, an ode to femininity and fashion. It’s published by Paripé Books, photobook and young narrative publishing house, established in Madrid six years ago and a regular nominee in Photoespaña.                                                     Designed by Estudio Herrera, with a Mexican office that collaborates since 2015 with cultural media, galleries, and artists from different disciplines such as architecture, design and photography.

In the book there are collaborations of prominent names of the cultural scene, like the world master of photography Martin Parr; Mexican Photographer Yvonne Venegas, and Anton Alvarez (a.k.a. C. Tangana) from Madrid. In the pages one can recognize faces such as movie director Marialy Rivas, actress Greta Fernández, director Santos Bacana and artist Miranda Makaroff.

IN CONVERSATION WITH TOVE LO