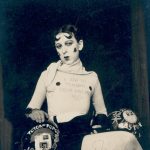 Dj and producer Philou Louzolo’s long-awaited debut album ‘African Gold’ releases on May 30th. With this album, Louzolo builds a bridge between his love for Afro and techno music.

After releasing 10 EP’s, the time has come for an album. “African Gold”  features 20 tracks, including pre-released singles ‘Senegal’, ‘Serenity Prayer’ and ‘Rejoice’. On the album, Philou takes you on a journey of different Afro styles ranging from Afrotech, Afropop, R&B to a fusion of house and techno. Louzolo: “With ‘African Gold’, I combined my love for techno music with my African heritage. The album title refers to the cultural wealth originating from the African continent, flowing through any music genre and moving every dance floor.”

The past five years, Philou experienced great highs as well as deep dips. His early success in 2017 resulted in traveling all over the globe from Europe, Africa to America – playing at legendary clubs like Berghain and major festivals like Nuits Sonores and DGTL. However, he canceled his tours when he started to lose the battle against his substance abuse in 2018. A long recovery period ensues. Nonetheless, Philou started rebuilding his career in 2019 with the birth of his label Wokoundou. But then the pandemic hits. Louzolo: “It was during this time that I realized what I truly want: building bridges and opening doors for artists whose music I love. I was fortunate enough to work together with 18 different artists on my album, whom I look up to very much, each bringing their own unique sound and qualities to the table”. ‘African Gold’ was a great opportunity for Philou to share his love for Afro music, connect with his Congolese, Nigerian and Sierra Leonean heritage and develop his own sound within the techno scene. “Now it’s time to release what I stand for. This is the music I breathe.”

Philou Louzolo’s debut album will be released on May 30th on Wokoundou. You can check out some singles from the forthcoming album on spotify now!

Tear down assumptions surrounding identity at the newest kunsthal exhibition