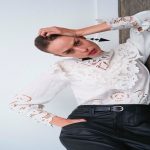 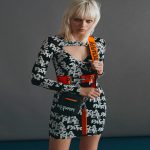 90s aesthetics. A re-working of the atmospheres and styles of the decade that symbolised theabsolute coexistence of different, sometimes opposite trends, which represented a moment of infinitepossibilities – styles, inventions, modernity, ways of life – in fashion and beyond. From musical subcultures to aesthetic ones, the 90s mixed opulence with minimalism, grunge with gothic, clubbing with purism, making every association acceptable and legitimising the sporty model in everyday life. Philippe Model Paris embraces this quest for experimentation and freedom of expression through a collection in which materials and colours come together in unexpected combinations. The senses of touch and sight are stimulated in an almost psychedelic manner.

From fluorescent varnish to soft, sophisticated leather, from nylon to metal animal print, from printedpony hair to absolute mono-colour elegance: a dynamic and harmonious blend thatmakes a well-known, familiar taste current and contemporary. There are two major innovations, for both men and women, in terms of models and shapes.

The first is EZE, an aesthetic tribute to the 90s, with its oversized shape and the mix and match style ofmaterials and colours reminiscent of a more underground, sophisticated taste. Eze is a new running shoe that is ultra-light, thanks to the use of innovative Eva technology, withdeliberately extreme volumes combining very different materials and colours.

The second is SAINT DENIS: an original idea of what a sneaker is, it was inspired by basketball culture and style, innovatively interpreted while confirming the brand’s Parisian soul. This even includes thename: In addition to being one of the most famous multi-ethnic quarters of Paris, Saint Denis is alsowhere the first basketball court in the world was built in 1892, and where the first basketball match in France and in Europe took place in 1893. Despite the sport having been invented by James Naismithin the United States a year earlier, the French capital, and Saint Denis in particular, can claim the honour of having the oldest basketball court in the world. When it comes to aesthetics, both the sole and the upper are characterised by the dynamism and movement of their lines and by varied materials.

TRPX and PRSX, reinterpretations of the brand’s iconic models, are literally dressed in new texturesand colours, from fluorescent to animal print to vinyl, ensuring that the brand’s heritage is always instep with the times. While Montecarlo, the running shoe par excellence with an innovative design that has marked an important evolution of the brand in terms of proportions, takes the concept of colour blocking to the extreme, pairing pop with metal.

The Philippe Model Paris brand has its roots in the creative genius of the namesake French founder and artist who, thanks to his eclectic talent, has earned a prominent place among the world’s fashion greats. In 1978, at just 22 years old, Philippe Model launched his fashion accessories brand, immediately collaborating withFrance’s top couturiers. The brand gained prominence in the 1980s, when the first iconic shoe, the Elastique,became a symbol of modern femininity, well ahead of its time in terms of the revolutionary concept of comfort seen in future sneakers. 2008 marks the year in which the creative talent of the French designer and artist met Italian excellence and know-how. In 2016, the brand set down a new path of international developmentwhen it was acquired by 21 Invest, an Italian private equity firm led by Alessandro Benetton. In addition to its elegant Parisian showroom, in 2017 the brand opened its new head offices in Via Bigli, at the heart of Milan’s fashion district and just a few meters from the first single-brand shop, inaugurated in May of the same year, in Via Sant’Andrea 17. 2018 saw even more openings, such as the Parisian boutique in Rue de Grenelle, plus Saint Tropez, Lyon and Rome’s Piazza di Spagna location. In addition to strengthening strategic markets such as the USA and Asia, the brand has opened one new shop in South Korea and five in China.