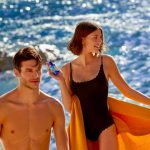 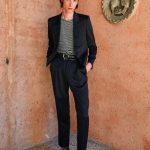 Under the radar, the Dutch-Syrian Achmed Oso has been building his fashion imperium in couture and exceptional tailoring for years. He doesn’t really like the spotlight, but prefers to let his work speak itself. That’s why he might be one of the biggest undiscovered design talents in the Netherlands. During the pandemic, the couturier got strength from the idea that his craft is the future of fashion. And that’s what he wants to show now, with an homage of no less than forty looks to the woman he loves the most: his mother. A non-seasonal collection, made in a forgotten couture technique that he learned from her. It’s the first new line from Oso Couture in two years.

It’s already twenty-one years ago when Achmed Oso came to Europe by himself. And it’s been seven years since he last saw his mother in person, who still lives in Syria. In the meantime, he has built something that he – and his family – can be proud of. Oso completed multiple parttime fashion studies at institutions such as: the Gerrit Rietveld Academie, Academie Artemis and M. Müller & Sohn, to gain as much experience as possible. Besides his education, he started out making orders for friends and acquaintances, in order to make a living. ‘They encouraged me to keep going, even though it wasn’t self-evident for me to become a top-tier segment fashion designer, with my background as a refugee and with very little money and connections.’ At the same time he had a passion and natural talent that took him to great heights. Because of his continuing success, he started making couture collections four years ago. Over the years, he has built up a loyal customer base, with all kinds of clients from the upper circles. Now he is launching Ode à ma Mère, a collection that he made as a thank you to his mother, who taught him the ins and outs of the craft.

In the environment where the couturier grew up, the focus was always on craftmanship. ‘Every home had its own workshop, for various purposes.’ He has especially warm memories of his mother’s workshop. She showed him the craft of ‘moulding’, a special couture technique: ‘Pinning off, draping, and cutting the fabric directly on the bust, without patterns or measuring tape – on the spot. That technique is not common these days; it takes a lot of time, it’s almost impossible to copy and you need to have feeling for it.’ Work based on feelings, playing with materials, that is Oso’s signature. In his workshop in Oegstgeest, the craftsman slides organza and tule between his fingers, a jumpsuit in crêpe-silk that seems to be made of snowflakes. Majestic, elegant, made with incredible precision and eye for detail, and at the same time playful. Roughly two hundred hours of craftmanship, by a small team of three.

For Ode à ma Mère, the couturier has used colours that his mother liked to wear: black and dark blue, pastel shades and soft gold. Fabrics of the highest quality were embroidered and woven in Italy, especially for him: from silk to jacquard, combined with diamonds and manually embroidered flowers. ‘The most beautiful gift I can give to my mother’, that was the starting point.

Aside from couture, occasional wear and wedding dresses, Oso also makes women’s suits. It turned out there was a lot of demand in the Netherlands, and he noticed that there were not a lot of items like this for women on the market yet. He excels in women’s suits with an exciting twist and a sublime feminine fit. At Oso Couture, everything is handmade in his own workshop, from A to Z. Translating a customer’s stories into clothing, that is Oso’s biggest passion. For wedding clothes, he really takes his time: he goes through the whole process with his clients, from the first sketch to prototype and finally the dress (or suit). ‘Afterwards, the bride often tells me that she’s sorry that the shared journey has come to an end.’

Craftsmanship should be the norm, Oso believes. That can create the illusion that his clothing is unaffordable. But he thinks it is important to reach a wide audience. In fashion, sustainability is more important than ever. This requires going back to basics, according to the designer: quality, craft and dedication, production close to home, avoiding waste of materials as much as possible. This requires fashion students to be taught how to work with needle and thread again, to really learn the trade. One of Oso’s biggest dreams is to one day teach the craft to underprivileged children. A gift that has opened a lot of doors for him,  and that he would like to pass on. He also hopes to one day be able to organise a big show, where his parents can be present.