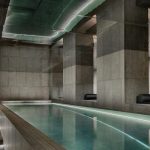 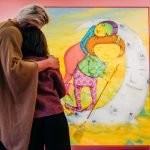 Recently Matcha Mafia opened the doors of their first location in the Saenredamstraat in the popular Amsterdam Pijp area. The company is founded by three matcha enthusiasts that love to see the connections that matcha can provide. With Matcha Mafia they aim to be the premier matcha brand bringing matcha to Europe.

The matcha – directly imported by Matcha Mafia – is from Uji in Japan and is the highest quality Ceremonial Grade Matcha. Matcha is green tea leaf powder full of antioxidants, amino acids (L-theanine). When drinking Matcha, you're actually drinking the entire leaf, which means that you absorb all the nutrients the leaves provide. This is why matcha contains 137 times more antioxidants then normal green tea. Also matcha boosts your energy level due to the slow supply of caffeine. In contrast to coffee, drinking matcha doesn't have any highs or lows, but a steady energy boost.

Matcha Mafia serves, besides two seasonal specials, eight different types of lattes. These lattes can be both served hot and cold. They also offer an extensive selection of vegan milk options like oat, coconut, almond, unsweetended almond and soy milk. No artificial coloring is used and all their ingredients are a 100% natural. Not only does Matcha Mafia serve you great lattes, they also have healthy food options, such as date balls and chia seed pudding jars (both vegan and gluten free).

Marije Achterbosch (Head of Product and matcha aficionado!) discovered her love for matcha when she was modeling in New York. When she moved back to the Netherlands she missed her lattes so much that she made it her dream to bring matcha to the Netherlands. Alexander Dengler (man behind the operations) saw a business model in this idea. He decided after a career at Uber and Google that he wanted to focus more on creative entrepreneurship. Alexander is also responsible for the brand design and decor. The Matcha Mafia crew is complete with Ilona Swagemakers (Head of Retail Operations and Chief Ginger Officer) who recently moved back to Amsterdam from Singapore where she managed LAVO. She takes on the day to day business at the first Matcha Mafia location.

Recently they added two new drinks to the menu that taste absolutely and are as all other products on the menu fully organic, those are the Matcha lemonade & The Choco nuts with cacao, peanut, hazelnut and ashwagandha. Also coming to the menu soon are two brand new toasts: bruschetta with their own homemade matcha hummus and smoked salmon with matcha cream cheese.

They also host Matcha workshops once a month, where people learn everything about Matcha but also about all their drinks. All the lattes have their own super foods and health benefits and they love to share this to the world.

You can order Matcha Mafia through UberEats, Deliveroo and soon also via Thuisbezorgd.nl