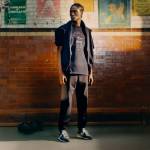 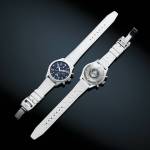 With its lean proportions and sharp styling, Luminor Due reinterprets the unmistakable shape and features of the iconic Luminor collection in a refined form that is equally suited to casual wear and elegant environments that call for elevated dressing. Originally a time only model, a complication has been introduced to the collection for the very first time. The moon phase, among the most poetic complications, is the centerpiece of Luminor Due Luna—the final word in its name being the Italian word for moon, which appears on the dial. Available in four iterations, all in a 38mm that appeals to a broad spectrum of wearers, it promises to become a key pillar of the Luminor Due family. In each variation, the complication, situated at 3 o’clock, exhibits a rotating disc with a 24 carats moon against a starry midnight blue sky.

The various references have distinct aesthetic sensibilities that appeal to a broad audience. Luminor Due Luna Madreperla features a mother of pearl dial and case made from Panerai Goldtech™, an alloy containing platinum and a high percentage of copper; the combination endows the metal with a deep, red tone. Applied numerals and indexes with white Super-LumiNova™ appear on the dial, while a polished alligator strap is a lustrous finishing touch. The open caseback reveals the workings of automatic 3 days power reserve calibre P900/MP within.

Two Luminor Due Luna references—both with steel cases—feature white sun[1]brushed dials with the signature Panerai sandwich structure and beige SuperLuminova™ within their numerals, indexes, and hands. While one boasts a polished pink alligator strap (PAM01180), the other includes a Luminor Due steel bracelet whose links echo the profile of the trademarked Panerai crown-protection device, a quality accentuated by alternating polished and brushed finishes. Polishing along the edges of the curved links endows the bracelet with added dimension and refinement.