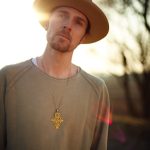 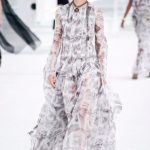 Stepping into a territory that is still stylistically vague. A sensitive zone that erases gender and promises exponential creative possibilities. What does an in-between garment look like? What kind of cut can dissolve masculine and feminine? What wardrobe might s/he look good in? A fascinating new exploration for fashion, and the promise of a great journey that Louis Vuitton sets out to discover by abolishing these last boundaries. Finding expression in a landscape that is tenuous and vast, but also neutral: giving it colour, forging its character, inciting radicality, giving it personality. This is but the beginning of a reflection that is open, stimulating and fundamentally conscious.

What is the inspiration for this collection?

More than an inspiration, it’s a question, the very signi cant one of gender. We’re going beyond the basic idea that a woman gains power by co-opting the masculine wardrobe. What space is there for a category of clothing between feminine and masculine? It’s a growing space and its contours are ever more permeable. We’re de ning a type of clothing that lives in a non-binary zone. It’s fascinating
to consider. What is a non-binary garment? Inevitably, it’s the designer’s role to o era point of view.

What’s distinctive about it?

By way of pure demonstration, it could be the structure of a jacket that’s in-between – as feminine as it is masculine. Or for example, the t-shirt dresses in the nal series. They could be dresses, but they could also be exaggerated t-shirts that skaters wear over shorts, or something basketball players might wear. Classic overcoats are nished like oversized sweaters. Phosphorescent fabrics lend the impression of movement, like mercury ‒ the chemical quicksilver ‒ or a changing sky. It’s an interplay of appearance and disappearance. Something chameleon-like.

Is it a new style?

I nd myself back to what I’ve always loved doing, which in the end de nes my work throughout my career as a designer. Stylistic hybrids. Patchworks of di erent materials. How to mix sartorial opposites, bring them together, fuse them. If you take a powerful term like ‘gender- uid’ and apply it to fashion, it’s really the idea of uidity in a garment that moves harmoniously from one to the other, and which is one and the other. That’s all the more important today, when we see how clothing can become the centre of debate about what a man or a woman should wear. How we can call someone into question based on what they wear. I was struck by a news story about English students in uniform who, during a heatwave, were so hot the boys wore the girls’ pleated skirts in protest. Society is evolving faster than protocol. Obviously, those who personify this most are those who de ne themselves as non-binary. But more and more people are totally comfortable with wearing clothes that don’t traditionally align with their gender.
It’s an interesting phase, and it opens up lots of creative possibilities in fashion. Before, we always de ned the characteristics of one gender while attributing them to the other. Today, there’s this neutral zone that un-categorises everything.

Can you please describe that neutral zone?

What if being non-aligned were engaging? Being neutral can be radical. There’s nothing bland about it: neutrality can be powerful, extreme and expressive. It's a galvanising exercise. On some styles, prints are made up of words that are like positive injunctions: “Vote”, “Stand”, “Sprint.” I wanted to transliterate an energetic, vigorous, daring collection. We need that right now.

You’re showing in restrictive conditions, in which the majority of the international fashion community is unable to attend. How are you presenting your collection?

We are holding a show beneath the glass roof at La Samaritaine, a symbolic place within a prestigious location in Paris – on the top oor where the peacock frescoes are. This gigantic Art Nouveau painting, which was rediscovered and restored during renovations, speaks in a way of resilience, a desire to carry on…. The physical experience of the show is di erent from the digital one. In-person guests will be surrounded by green screens, the kind used in lmmaking for integrating special e ects. While the IRL audience is watching the show, online there will be a di erent, interactive environment for those who were unable to travel. While some guests will be able to direct the camera and interact with the show, creating a personalised perspective, the entire online audience will see a special set that features scenes from the Wim Wenders lm “Wings of Desire,” a story about angels, whom liturgy tells us are sexless, but who choose to experience life thanks to the power of love.