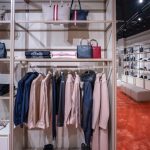 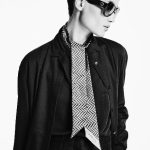 Designed by Jonathan Anderson, the ‘Anagram jacquard’ collection sees the LOEWE anagram appear as a pattern and a standalone icon across ve of the house’s bag archetypes: the Hammock, Balloon, Cubi, Horseshoe and the new Anagram tote. The collection weaves the icon into a new, canvas fabric using a special double-warp structure to provide extra de nition and a tactile, 3D effect to the unique hues of anthracite and ecru.

Originally designed in 1970 by Spanish painter Vicente Vela, who took inspiration from the folded metal of branding irons used to mark the leather of cattle, the anagram in the shape of four ‘L‘s has become emblematic of LOEWE’S identity ever since. The design has undergone several changes over the years. In 2013, when Jonathan Anderson joined LOEWE as creative director and undertook an extensive rebranding, the existing baroque style of the anagram received a modern refresh, creating a cleaner, sharper symbol that has been incorporated in product design and across all communications since.

Classic yet contemporary, the Anagram jacquard collection introduces a pattern of repeating anagrams across the fabric of Hammock, Balloon and Cubi bags. With its soft, body-friendly form, the latter in particular takes full advantage of the comfort and practicality offered by the lightweight, yet durable, canvas jacquard, and the adjustable leather shoulder straps available in two lengths.

Horseshoes and Anagram totes offer a different approach, presenting the kaleidoscopic emblem as a standalone icon in the centre of the bags. Intricately hand-crafted by the artisans of LOEWE’s ateliers in Spain, the Anagram jacquard collection is available in the complimentary colourways of ecru with tan calfskin trim, and anthracite against matt black calfskin. Each piece is nished with LOEWE ‘Made in Spain’ branding embossed in gold on the inside of their leather straps, reminding us of its heritage, and the history behind it.

The Anagram jacquard collection will be available from 11 February, 2021.

BALLY has opened its only shop in Belgium at Maasmechelen Village