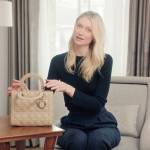 Music icon Joni Mitchell is this week’s guest on Elton John’s Rocket Hour on Apple Music 1. In this special in-depth chat at Joni’s Los Angeles home, she reveals that she is releasing a new album following her surprise appearance at the Newport Folk Festival in July, which was her first full live performance since 2002.

In the interview she discusses her music not receiving the recognition it deserved at the time and how it upset the male singer-songwriters because her music was “intimate”. She also discusses how this generation is better equipped to deal with emotion, how rock ’n’ roll pioneer Chuck Berry is the “G.O.A.T.”, how war enrages her and how we should all be more concerned with the ecology of the planet, and how she didn’t rehearse for her Newport Folk Festival appearance. Elton also reveals his ambition for Joni to record an album at her house.

DIOR PRESENTS A NEW EPISODE OF THE ‘IN MY LADY…’ SERIES