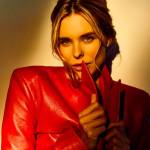 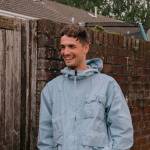 Jennifer Vanilla, released their new album Castle In The Sky out via Sinderlyn, home of HOMESHAKE, Cults, and more.

Jennifer is a NYC pop performance artist and used to be a member of the Brooklyn pop band Ava Luna before they began releasing music as their alter ego, Jennifer Vanilla. Through this persona they’ve crafted musical albums, choreographed stage shows, a neighborhood variety hour, fake commercials, a public access television program, and sought-after merchandise-as-conversation-pieces that have been the talk of the town in New York’s music, art, and fashion spheres.

In the early 21st century on the bustling streets of New York City, Jennifer Vanilla is a container, a portal, a joy delivery system, a self help regimen, a social mirror, a Times Square celebrity, a shark-toothed advertiser, a kicky talk show host and an ebullient mascot. Kauffman inhabited Jennifer and transformed through Jennifer, and vice versa. This conversation in fantasy was, thank Jenniferia, dutifully documented and took shape as the full length album Castle in the Sky, released on Sinderlyn Records.

Jennifer Vanilla performances often are exercises in the transformation of reality through fantasy, testing the limits thereof, while the songs of Castle in the Sky are an artifact of that laboratory. Many of these songs took on numerous incarnations over the course of years before arriving at their album form, mutated in direct response to audience reaction. The fantasy was always open to interpretation: blurring the boundaries was the point. “We could each be enacting our own personal fantasy of what was going on throughout the show,” says Jennifer Bear, who would recite poetry during Jennifer Vanilla shows written by their real world counterpart Elsa Brown, a vocalist and lyricist on the album.

The conversation of the record is one of transformation and reassurance – created over the course of four years, during which Kauffman had the realization that they were gender fluid and non-binary. Kauffman realized sometime in 2021 that their Jennifer Vanilla alter ego was far more queer than they had consciously perceived; it functioned as a sort of drag in its playful fantasy, always defined through a carefully nurtured relationship with the audience.

“That’s what the process of living inside of an alias has been for me, a way to identify the vision, see where you’re at, and close the gap,” Kauffman says. “I started Jennifer Vanilla so I could learn in front of people, and display a kind of curiosity and openness which I would probably be far too fearful to do without the cover of an alternate identity. It’s a distinctly Jennifer kind of courage to be curious out loud in this exhibitionistic way.”

IN CONVERSATION WITH SUSIE ABROMEIT

IN CONVERSATION WITH EWAN MCVICAR