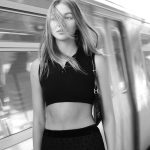 She acts in Jacques Audiard’s latest film Les Olympiades, gives the reply to Sting in Kaamelott, is at ease on a stage singing her compositions, and surprises everyone in a noisy studio full of photographers. As Jehnny Beth is more creative than ever, Franck Alan Steed tries to find out where all her energy comes from – and where it drives her to.

« I like to concentrate on the present moment but can’t help to anticipate the future. The good thing is, when you are there in the present, it doesn’t matter who you were with in the past. »

It seems like you have done modeling forever. Being directed by a photographer feels natural for you?

It is something I have done for a decade. I started in my early twenties. When you are a musician you are often asked to pose for a picture. I must admit I was not comfortable with this at the beginning of my career. I rejected fashion shoots, especially when I was singing in my group, Savages. We were a punk band in London, and I had seen female bands become a fashion attraction, and their music not being taken seriously. We adopted a male behavior very fast. On stage, we would be dressed only in black so people could pay full attention to the music, the words, and the message. It worked, people talked about our music, more than our image. So you understand that I’ve come from a long way shooting for Numero. Today, I love doing a fashion shoot when there is a concept, the vision of a photographer, the imagination of a stylist, and the creativity of a make-up artist. All combined is a real art of transformation.

Is it easier to be the model or the photographer?

Unfortunately, I am a better model than a photographer. Photography is an art I feel very connected with. When I talk to a photographer, I need to discover his previous work, his technicality, and artistic references. There is something very specific in the collaboration between the photographer and the model. I discovered that when my partner, Johnny Hostile, created a book with photographs he had taken of anonymous models, and erotic short stories I wrote for this project: « C.A.L.M: Crimes against love memories ». I was one of his models, and it was quite a creative experience to see his images and my texts side-by-side in the book.

How come you have such an amazing accent both in English and French?

I must admit I’ve been obsessed with the English language since the age of eight years old. I started singing jazz in English with a teacher and then studied the language for three years, got a license in English literature. But the truth is that I lived in London for thirteen years. I moved there when I was twenty years old. That’s where I started my band, Savages, and my first records. I then went back to Paris, where I now have a studio with Johnny Hostile. I started making a bit of cinema and published a solo record: « To work is to live ».

Today you write, act, sing, compose. What led you to pursue an artistic career?

It was theatre and music. When I was young, I would sit down after school in a big theater directed by my father and watch the rehearsals. I would watch plays like L’éveil du Printemps, by Frank Wedekind, or hear Edward bond’s work. I would know some scenes by heart. Witnessing my father creating something with a group of people and directing young actors, with those amazing plays left very strong memories. All are still in me.

You knew very soon you would get on stage?

I remember very young telling my parents I would be going into an artistic career, and oddly enough, they were ok with that as far as I can remember. I chose music because I left for England with Johnny Hostile. One day, we just took a car and drove to London and settled there. It happened as simply as that. I kept the knowledge of those years spent at the theatre and introduced some concepts in my show with Savages. For instance, we would not allow any color on stage, lights had to be white, which is kind of a theatre thing. We would ask dance companies to perform in the crowd before our performance, like a first act, to create an original feeling, a bit like Anne Imhof is doing to surprise the crowd at the Palais de Tokyo.

Is London still a must for any artist ?

London is a harsh city, it is a difficult place to live, but people are amazingly friendly and helpful. It is the real place for diversity in music, where a young person can express her talents and be herself. You can be who you want to be in London. The city welcomes people who are different and play any kind of music. To me, it became home – and still feels like my home, it is the city I know the most in my life.

It’s true that when I started there, London was a different city. It was more cosmopolitan, there were a lot of different nationalities, different musicians coming from over Europe. With Brexit, things have changed, a lot of creative people have left, London lost a lot. But the fact is I would advise a young person to leave her own country because we don’t realize until we move how French you are. While New York is an amazing place for music, I love Los Angeles, where I found a real community of musicians. I lived there for a few months and enjoyed it a lot. But Again, there is not a city better than another, it really depends on what you do. For music, London is still the ground for a lot of young amazing

How tough is the competition?

I see other bands, writers, actors more as an inspiration than the competition. When things are happening around you it stimulates your creativity, even when you dislike what you hear or see, it still inspires you to create what doesn’t exists yet. I think this is true for music, movies, as well as graphic arts. I always love doing new things, starting things I don’t know how to do. When I was asked to act in a movie, I had absolutely no idea of the intense work it would implicate. It was so challenging: learning the script, knowing how to behave with other actors, or simply understanding what is meant of you.

Do you feel more comfortable with writing, singing, composing, or is it creating that matters?

I think what I want is to have a project, something to look forward to. That’s my definition of happiness. Finishing a record, writing a book until the last page, even thinking about a role I will play in a movie. These are projects and they make my life true because they make me feel almost a spectator of my own life. I look at life as if it were raw material for making something out of it. It becomes a bit more light, playful, more fun. That is why I like to make records; you start with nothing and two years later, you have this piece of work you created. It is a great satisfaction. Collaboration makes me the happiest. The shoot we did for Numero is part of that. When I did Love is to live last year, I worked with Atticus Ross in Los Angeles and a lot of other amazing people. Every time I find people that bring ideas I wouldn’t have by myself.

How did you go from music to being an actress?

I played in my first movie when I was seventeen, but at the moment, I was more attracted to the stage. Ten years after, when I came back to Paris, I made a list of the things I had stopped doing and loved doing. One of them was acting. Since then, I started to think about the first steps I should take, tried to figure out why I had stopped, prepared myself to work every day towards this new goal, and waited patiently for an outcome. Things happened very fast, quite naturally.

Is it easier to stage what you have created than to interpret the ideas of someone else?

In music I prefer to sing my own material, I feel the need to express myself, to sing when I have something to say. I enjoy singing as it has a very specific meaning for me. Acting is a bit different, it is a role play, a challenge, which I quite enjoy. I play characters that are different from me, a bit like in drama school.

How did it reflect in the Les Olympiades?

In the Jacques Audiard Movie, I played a cam girl and Jacque told me «you are not a character ». I had to find the meaning of the role, it's very true purpose to make it real. How you build a character, how you work as a team is an incredible experience. Everything is a world apart. In Les Olympiades, there was Virginie Montel, who did an amazing job with the artistic direction and costume, Stephanie Chene for essential choreography, body movements. And of course Jacques Audiard for his acting direction).

You said one day that you had to "believe in my own value and invest in myself". How do you do that in this ever-changing artistic environment?

I would say you need to be well surrounded. What saved me is that I am in such a fusional relation with my partner, Johnny Hostile. He has always seen my value, believed in me even when I didn’t. I don’t think I would have the energy I have if he wasn’t in my life. In a nutshell, love is necessary for your personal life as well as your professional life. Expressing your inner light can be done in a healthy environment, not the contrary. The difficulty is not to sell yourself too short, especially when you are young. They are decisions I made when I was young, people would come, tell me I was going in the wrong direction. But I found it meant I did something interesting, I was taking risks. I am not impervious to consultations or advice. But I know that when my idea makes someone uncomfortable, it usually means that they are good.

Is preserving a family life a hopeless fantasy when you manage as many projects as you do with so much energy?

Of course, it’s hard, especially when you are working full-time on an artistic project. I do different things to keep balanced. Boxing is one, for example, and has become an important part of my life. It is essential for my mental health and it allows me to meet people who share the same passion. Otherwise, I try to travel a lot, meet friends all over the world. Inspiration comes from life and movement, so discovering talented, creative people in your personal life or at work, is perhaps the secret to achieving your goals.

In conversation with Jessie Andrews