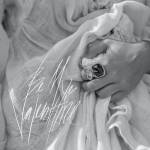 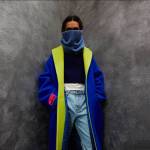 Van Herpen recently collaborated with French artist Julie Gautier to create a film that explores the idea of femininity and female beauty as a form of control. The anticipated movie is inspired by womanly bravery and perseverance.

The film Carte Blanche paints a picture of the female body as a tool to claim freedom as well as a weapon to oppress and control. It is an ode to the ongoing resilience and strength of women worldwide and to the strength of Iranian women whose bodies have served as a battlefield for ideology and authority.

“In the beginning three woman are melted together into a painting of skin, textures of growth and decay. The red heart of this female ocean drifts down alone into the deep depths of her own consciousness where she dances a journey of isolation and oppression moving into resilience and invincibility.”
Iris

In the film, Van Herpen and Gautier use the symbolism of water to subdue female shapes into a choreography that slowly disembodies control. Where the movements tell a story of fortitude, resistance and finding freedom.

Van Herpen is proud to announce that they are taking their fashion show to a digital platform this season. Instead of a traditional runway show, the brand shows a digital presentation that allows for more creative freedom and storytelling.