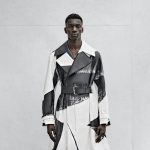 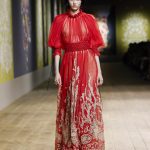 Holding a lens to our intangible identities and shifting society with the metaverse and hyperreality at the horizon, this collection explores the depths of the body in posthuman realities.

With the new realms of our digital lives expanding, we are faced with an eternally rhetorical question: who are we beyond our physical bodies? Is the digital you shaping your pre-existing compass?

While facing the spin off of these multiple realities, the collection contemplates our oscillating identities:  how do we envisage our digital counterparts? Who do we dream of becoming in these digital  realms?

Through ‘Meta Morphism’, Van Herpen expresses the body as an elusive system, rooted in transcience and speaks to a greater message of introspection.

The leitmotif of van Herpen’s history expresses the body in a state of permanent flux, metamorphosing with the milieu, and while the Maison is regarded for its futuristic approach, this season the designer reflects on Ovid’s Magnus opus poem ‘Metamorphoses’, written around the 8th century. At the time of Ovid’s writing, the act of metamorphosis was appreciated in relation to humanity and its place amongst nature, yet Ovid’s retelling exists relevant today, navigating the ramifications of technology that is constantly complicating the definition of identity. With the ability to recreate our digital twins, the space of soul-searching, losing a sense of self, and finding new realities, are life lessons.

For this anniversary showcase, Iris van Herpen makes her debut into the metaverse in collaboration with Microsoft, fusing the realms of digital and physical Couture to create a first-of-its-kind mixed reality runway experience. During the show, physical models exist in harmony with digital avatars, shown through HoloLens 2 headsets and augmented reality on mobile phones, while digital portraits of  Ovid’s myths are newly envisioned to intersect the physical show.

Through a sequence of 16 physical looks and 3 digital tropes, ‘Meta Morphism’ examines the ancient visions of Ovid’s mythology through modern themes of transhumanism, where man and technology exist in eternal fluctuation, thus defying classification, allowing us to question the limits of our self. Resounding the thematic tensions between artifice and nature, the collection is built around three myths,  the story of Arachne; the story of Narcissus and finally the story of Daphne and Apollo.

Through their disparate presentation of the Gods, Arachne – a masterly weaver who challenges the goddess of Athena, and is notorious for her craftsmanship – is transformed into a spider through shame,  to hang from an eternal thread. In the collection, the tragedy of Arachne is translated into fine laces that are gradient dyed and trapped in embroidered webs, causing the trapped spiderwebs to float. Other looks are designed as if Arachne is still weaving them, hundreds of unspun threads float and spin around the body. On a deeper layer – emotional perfectionism and personal pressure are expressed in these looks, speaking to a wider societal message and the vivacity of the present age to view ourselves from afar.

Arachne’s digital twin avatar is also spinning a multitude of spider silk threads around her. Her golden  threads are snares that defy gravity and float upwards into a cosmic web above her. Her spinning acts  like a musical instrument and while she spins her golden silk instrument, she becomes the composer of  her own body.

The second myth behind the collection evinces the story of Narcissus, who falls in love with his own  reflection, slowly languishing to death through self-obsession.

The translucent layering and reflective textures of growth in this collection speak to a greater message of introspection. Demonstrating a more radical colour palette for the Maison, accruing the lightest colour way of any collection so far, the cream hues and beige tones are parabolic of the feeling of the self-examining arc of this season. Transparent voluminous drapes echo around the body like ghosts,  creating patchworks of shadows, designed to turn inwards on ourselves and question who we are,  and who we are to become. Accents of dark blues and amethysts, ochres, metallic silvers and copper intersect the lucid palette, mirroring the vibrant flecks of our personalities. In the show’s opening look, the long white ‘Narcissus’ coat is embroidered with an artwork of echoing faces that shift while interlocked. The portraits become glitchy and seem to slowly melt away. The ‘Narcissus’ gown and coat express the power of self-creation and the contradiction of how self-obsession can ultimately cause loos ing your sense of self.

The third poem to the designer’s ensemble recounts the relationship between Daphne and Apollo. A  tale of objectification, Daphne was the first love of the god Apollo but met with unrequited affection, a  parable of lust in the face of rejection. The allusion to Daphne and Apollo is betokened through the finale look, embodying the very moment that Daphne transforms into a laurel tree, while the ‘Glitched  Growth’ dress and other looks mimic the alternate stages of Daphne’s metamorphoses, diffusing the creation of plant and bone structures growing together. These looks are designed around body objectification and imagine future metaverse hybrids of Daphne’s myth in which the body is boundlessly transformed and where man and nature are indistinguishable.

In keeping with Maison’s collaborative spirit, this season, Iris van Herpen partners with sculptor  Casey Curran, bequeathing a prospective statue of a future Daphne, bursting from the centre of the runway. Daphne’s sculpture transforms through herbose creatures blooming from her skeleton, at her chest appears a large crevice, revealing her mechanical heart pulsating inside, pertaining to the notion that the elusiveness of identity means that nothing can perish. Further references to the mythology occur in feminist spirit, as Apollo is orated through a chorus of golden flakes that flutter out of Daphne’s mind, mimicking his infatuation.

The act of correction and physical modification is further teased through Maison’s use of 3-D printing in collaboration with Dutch designers Eric Klarenbeek & Maartje Dros, to develop the ‘Singularity’  jumpsuit. The intricate ocher colour design is conjured through 3D printing, using left-over cocoa shell beans. The cocoa beans have been processed into granules and combined with glucose in order to stabilise the raw material of the cocoa. Afterwards, this mixture is spun into a printable filament. The result is a fully organic biopolymer which sets an example for a fully sustainable production chain. The plantlike body embellishments within the jumpsuit are copper coated, draped and entwined with up cycled organza, while another 3D print has been printed with ‘Materialise’, using 100% recycled  ‘Bluesint’ powder with SLS technology (Selective Laser Sintering).

What neatly threads each look together is the underlying proclivity of motion, from draped banana leaf fabrics to the ceremonial Futurama gown – related to Daphne’s metamorphosis, where 3D printed plant and bone-based textures align in fruition, to the Arachne gown where fine threads spiral dramatically around the body like the dexterous technique of Arachne’s artful web.