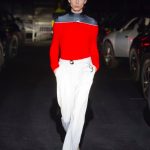 Music On the Playlist Portrait

Latifah (28) the all-round musician from Amsterdam started to develop her extraordinary talents from an early age, starting with sessions in her bedroom as a child to now being the freestyle Queen and nation’s most established female rapper, with the biggest listenership to match.

She’s known she wanted to become a musician since she was a child and was inspired by artists such as Lil Kim, Missy Elliot, Foxy Brown and Nicki Minaj. Latifah’s drive is impeccable and helped shape her into the artist she is today.

At the beginning of 2020, Latifah chose to operate as an independent artist after working with a label for four years. As the first female rapper in The Netherlands, Latifah has developed her own eclectic sound resulting in 147 million streams and counting. Her fiery flows and melodies have made her a staple in the Dutch music scene, with Gold and Platinum statuses under her belt.

Latifah is a power woman who never shies away off from a challenge and is ready to show men what women are capable of. She has worked with heavyweights from the industry like Fresku, CHO, Esko, Jonna Fraser, Frenna, Henkie T, MocroManiac, Jermaine Niffer, Hansie, Jairzinho, Dylisa, Roxy Rosa, Tabitha, NAVI, Architrackz, Bryan Mg and many more.

After taking some time for herself, Latifah is now back again with her recognizable style and charisma, ready to take over the world!

The best thing about being an independent artist is having the freedom to enjoy your passion. Independence translates to freedom. Do you like freedom? – Latifah van Callias