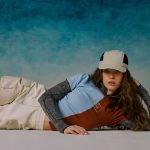 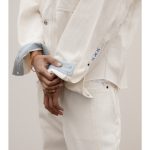 IN CONVERSATION WITH RINA LIPA

Rina Lipa is an emerging actress. Talent for the arts and entertainment runs in the family, with Rina’s sister Dua being a global popstar. At just 20 years old, she has landed her first role in a horror thriller film. Alongside her acting career, she has worked with many major fashion brands and opened the Fall GCDS fashion show in 2021, walked for Ruben Selby at London Fashion Week 2022, took over LFW IG for a day and recently completed Versace ‘Sisterhood’ campaign with Dua. She documents her days on Instagram, where she already has over 900.000 followers.

Rina, you’ve grown up with someone who had big dreams and goals. Your sister Dua suceeded and is an internetional superstar. How did watching your sister build such a successful careeer impact your own dreams?

Watching Dua working so hard and being so determined at building her career was something that was very inspiring to me and it kind of pushed me to also work hard and go for it as much as possible.

You and Dua are very close. What is your favorite memory with her growing up?

There’s so many to choose from, but I would say probably our trip to New York. It was my first time in New York and it was really fun. Things that I had to do were like bucket list things when you first go. We were in Times Square and I had to get a really good picture of me in Times Square. So it was a situation of us trying to stand in the middle of the road and stop traffic and get the right picture. It was just a very funny situation to be in. The whole trip was just so much fun. It’s definitely one of my favorites.

Do you enjoy traveling? Is this something you want to do a lot more of in the future?

Yes, I love traveling and exploring new places and finding new places to eat. Just walking around new streets and becoming a local in a new place is so fun.

Do you have any place that is at the top of your bucket list?

I’d love to go to Tokyo. I’ve never been to Asia and I would love to plan a trip and go explore that side of the world a little bit more.

You just landed your very first movie role and will be starring in a horror thriller, directed by Italian filmmaker Gianluigi Carella. What can you tell us about the film?

It’s a very eccentric horror thriller with very complex characters that I was really excited to get to know and delve into my character a lot more. There’s some really fun, wild action sequences, which were really fun to film and I can’t wait to see how everything comes to life.

Last year you opened the GCDS Fall fashion show in Milan. You’ve also worked with many major fashion brands already. What makes you love fashion so much?

Fashion is a really important part of my life. I think day to day I dress depending on my mood. I think it’s a really good creative outlet. People can express themselves and show exactly how they feel that day or what they’ve been finding fun. Finding new styles as well is something that’s really exciting.

How would you describe your fashion style?

You also have a passion for dancing. What sparked this passion of yours?

I started doing ballet at a very young age and I loved it so much. And I was on point shoes at a very young age as well. It was just something that I was so passionate about and we would put on plays and things like that. That’s where I found out about acting and I realized I preferred it more than dancing, but I still carried on dancing and I did a lot more contemporary dance and explored different types of dance at school.

Which dance style is your favorite?

Contemporary dance is the one that I love the most and I think I’m probably the best at. I think it’s a great form of art and storytelling.

As a dancer, do you feel it is a style that is the most expressive and carries the most emotions throughout the performance?

Definitely. For example, in theater there’s a lot of movement pieces that you have to do and I think it does kind of intertwine with dance. So I think contemporary dance really can tell a story and it can have a narrative.

Tatler magazine named you as ‘Gen Z It Girl’. How does this title make you feel? Why would you describe yourself as Gen Z It girl?

It’s so lovely, it’s a very flattering comment to have. I wouldn’t describe myself as the Gen Z It girl, but I think people enjoy my style and enjoy my work.

Your Instagram following is growing very rapidly, you have over 900.000 followers. Why do you believe social media is so important when building your career?

I think social media, especially Instagram, is quite important in a way because there’s a lot of friends you can make on there and you can get inspiration on there. There’s a lot of networking, you support your friends, work on there, you support your own work, you get to learn about other people’s stuff and work and get to connect with other people. I think the best thing about it is that you build a community.

Where do you believe we should set our boundaries when posting on social media?

Social media has its good sides and definitely has its bad sites. Like I said, it’s such a great place to be inspired or get to meet people and connect, work and share your own work. But then it can also have a negative impact when you might not get the reaction that you want or that you expected and that would actually make you feel insecure. There’s a lot of people on social media and in a way you are in the public eye, so it can put pressure on you. I just take it with a pinch of salt and I do it for fun.

It can be a very negative place as well. You don’t know at all what’s happening behind the scenes. A lot of people, we post our best selves on our social media. We post our highlights and nobody really knows what’s happening behind the scenes or what somebody may be struggling with. So I think everyone just needs to be nice to everyone and be kind and look out for each other because that’s the only thing we can do.

What is your favorite activity that you love to do most in your free time?

I love being able to just sit and watch a good film, either a comfort film or a film that I’ve not seen before. I love reading and I’ve only recently, since lockdown, got back into reading. I love to go on walks and have picnics in the park. I’m also not opposed to a night out in London. But mostly, I just love being surrounded with friends and family.

Do you have a favorite book at the moment?

At the moment I’m reading ‘Mexican Gothic’ by Sylvia Marino Garcia. I’ve never really read a suspense thriller novel. I got this recommended by a couple of people, so I thought I would give it a go and I’m hooked already.

Books are so great, they can transport you into a completely new world. And it’s really interesting how they can make our imagination work, cause I might imagine a character completely differently to how you would.

Where do you see your career in 3 years?

I would hope I would be on film sets and working and that being a constant in my life. I think that is where we’re heading.

Do you want to do more films or TV?

TV and film for sure. I think TV and film both share many things in common, short films as well. They’re all a great way to have a narrative that’s linear, but kind of transports you and takes you along a whole journey. It doesn’t matter if it’s an hour and a half or it’s over five seasons.

Have you ever had any particular idea of a character that you would love to portray?

The only thing I look for in a character that I wanna play is somebody who is very complex and has layers and there’s so much to explore. It’s not one dimensional, it’s someone who has a lot of things to look through and get to know and someone that maybe you have to do a lot of research for. Just a character that’s very complex, I think is the key for me.

Besides your first movie role, what projects are lining up for you this year?

This year is hectic already and we’re only a few months in. So, I’m in the horror film and there’s a short film that I’m going to be shooting. I’m really excited about it.

Have you ever thought about doing music, like your sister?

I never say never, but it’s not my main passion. I am musical theater trained and it would be really fun to do a musical or have a role where I can incorporate singing and dancing and acting.