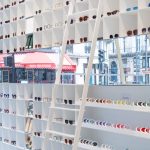 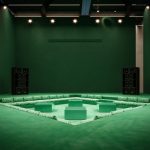 IN CONVERSATION WITH POM KLEMENTIEFF

Pom, was acting something you have always wanted to pursue? When did your love for acting begin?

When I was little, I felt that maybe it would be something interesting to do, but I didn’t know that it would be possible because I didn’t see anyone on screen that really looked like me. When I was little, my dad was also taking pictures of me all the time and I was used to being in front of the camera on some level, so there is something subconsciously that maybe happened. But my love for movies started when I was a teenager, around 16. I started going to the movie theater a lot and I would watch two movies in a row and watch independent movies back in Paris.

You were trained at the Cours Florent drama school in Paris before you appeared in your first, French films, such as ‘The Easy Way’ and ‘Sleepless Night’. What are your fondest memories from the beginnings of your career?

Certain teachers were really amazing and they taught me a lot of things and really believed in me, so through their eyes I could grow. I could imagine that maybe there was a place for me in that world and being at theater school. It’s amazing because you can choose to experiment and try things and make mistakes and create weird characters. It’s all about your imagination, all about pushing boundaries, having fun and creating with people your own age who are experimenting as well. There were also some teachers that didn’t really believe in me and didn’t think that I would do great things. So it’s kind of funny to look back now that I’ve done a few movies and to remember that whatever the teacher is thinking, you have to push through and work hard. It’s all about the journey.

You made your American debut in 2013 with a role in Spike Lee’s ‘Oldboy’. How would you compare French and American film industries? What would you say is the best thing about each of them?

The biggest difference for me is that for lunch there’s red wine on the table on French productions and there’s no alcohol on American ones, because usually American people are more puritanical, so these things are not allowed. I don’t think that people should drink when they work, but it’s nice to have the option. The movies I worked on in France were such smaller budgets, the crew has less people. Each adventure is different and I love each adventure for different reasons. So I’m not gonna say that one is better than the other.

For your role in ‘Oldboy’ you started taking lessons in boxing, but you also started training taekwondo after the film and have a purple belt as of summer of 2014. What was it about martial arts that captured you so much?

I started taking boxing lessons and I really loved it and it really made me feel empowered. Actually, I wish I had started boxing or martial arts much sooner. I would advice to anyone, boys and girls, to start when they’re little, because it’s such a beautiful practice. It’s all about respect and working hard, but pushing yourself and feeling stronger about yourself. And also knowing that you can defend yourself, but not having to use it unless you really have to. It’s not about being aggressive.

Would you say besides making you feel empowered and safe, it’s also something that makes you feel free in a way?

Of course. And it’s all about learning, there’s always more to learn and I’ve trained with a lot of stunt people. My friend, Jess, who’s a martial artist and used to do stunts has been teaching me kickboxing, boxing and different techniques. It’s incredible. I’ve been training with him and I have so much respect for people who do stunts. I think that they’re not in the limelight enough. It’s so hard what they do, they take the hit and they risk their lives. What is amazing about martial arts is that it also keeps you humble because you’re always learning.

What is the craziest thing that you have done for your acting career so far?

I’ve done a lot of crazy things, I’m a risk taker for sure. One of the craziest things that I’ve done in my life that I’m really happy to have done is that when I wrapped ‘Mission Impossible’, I went to learn skydiving. I got my A license and then I got my B license over Christmas break. It really opened a new world to me, it was so exciting to be able to fly, to dance in the sky. It was really amazing.

You play the role of Mantis in the Marvel Cinematic Universe films ‘Guardians of the Galaxy Vol. 2 and 3’, ‘Avengers: Infinity War’ and ‘Avengers: Endgame’.  How did you get cast in this successful and popular franchise?

I did a first audition with casting director, Sarah Finn, who’s been casting the Marvel movies for years. She’s amazing. Then I did a second audition with the casting director and James Gunn. And I had to do a screen test, so they flew me to Atlanta where we usually shoot the Marvel movies. I had to do a screen test with Dave Bautista who played Drax, because my character had the most scenes with his character. After that, I got cast pretty fast. James Gunn called me and it changed my life.

What do you love most about this franchise?

James Gunn really created characters that are so special and he created a world that is very funny and heartfelt at the same time with an amazing soundtrack and really moving stories. His characters are amazing and we’re shooting ‘Guardians of the Galaxy Vol. 3’ right now and it just blows me away how good the script is. I think it’s so special what we’re we’re doing right now and I feel so grateful for James. He allowed me to create a character that is really weird and different and I really love that. I just have so much fun with it.

I can’t share much, but I had so much fun shooting ‘Thor: Love and Thunder’ because I’ve been friends with Taika for years. It was really so much fun to be working together. And we shot the movie in Sydney when the whole world was in lockdown and Sydney was free. So it was really a special time. We’re also shooting the Christmas special and it’s so well written. There is much more of Mantis than what you’ve seen in Vol. 2, there’s much more to dig in and more to learn about the character, more to explore, so it’s nice.

You were born in Quebec, Canada where you lived for a year, before your family started traveling due to your father’s job. You lived in Japan and the Ivory Coast, before settling in France. Now, you are in NY and LA. How did living in so many difefrent places and cultures shape you as a person?

I think it helped me to adapt to different cultures, to different worlds and to different types of people. And in some way it’s funny, because I’ve always felt like an alien, I’ve always felt different. When I lived in Japan, my mother was Korean and I was mixed. I was also not like them when I was in Africa and I was not like them either when I was in France. I was always the person from somewhere else, like an alien, like Mantis. When I was little, I was used to go from one country to another country. So I got used to not make myself too comfortable and be ready to move. Now it’s hard for me to stay in the same place, but it’s exciting too, it’s always an adventure.

Usually when people are living Europe, they’re used to going to a different country in Europe, to explore. But there is a lot of American people who’ve just been in the US forever and who’ve never been in Europe or Asia or Africa. So I think there’s like something’s missing sometimes for people who just stay in the same place. There is so much in the world to discover.

What are some of your favorite things about France, that you would absolutely recommend tourists to see or try?

You can go to the south of France, you can do Paris, you can go to so many different areas in France. Speaking of Paris, what I loved to do when I used to live there, I had a vespa and I would just drive around the city. It’s amazing because you can slalom, you can go in between cars, you can go right next to the river. And it’s so special to do that because it’s not like walking around or taking the subway. And it’s also amazing if you have a little picnic right near the river. You can buy some baguette, some cheese and some wine or whatever you like, just the simple things. It’s very special and beautiful.

There are a whole lot of troubling social issues going on in the world. Is there any special cause that you support or would like to support?

I’ve been thinking about it and there is so much going on in the world. It’s hard to choose one cause because it’s very overwhelming. But I’m always impressed about all of the work that ‘Planned Parenthood’ has been doing. I was lucky when I was growing up, to have access to all these things as a woman, like birth control. But it’s really crazy for young women, it’s super hard with all the problems, like access to birth control or abortion, especially within the US. It makes you feel like we are going backwards.Women should have control over their bodies and not another person deciding for them. It’s just insane that we’re still talking about it, but it’s beautiful what ‘Planned Parenthood’ is doing and how they’re trying to help in many ways.

‘Mission Impossible’ movies are known to be shooting for a long time and in crazy locations and we have to reshoot sometimes. It’s all very exciting and I feel very lucky to be working with Tom Cruise. I can’t wait for you to see it and I can’t wait to see it myself.

What are your other plans, besides your busy acting schedule, for the next few years?

Work wise, it’s great because I have a lot of things to do. I’m also moving into a new apartment in New York, so I’m really excited about that. I’m making myself a little home and I just wanna travel more. I would love to ride horses around the world and maybe ride horses in a safari next to the giraffes galloping, which is my dream. I would love to do more skydiving and go on more motorcycle trips and discover upstate New York, as I don’t know that area at all. I would also love to go back to Europe. I’ve never been to Greece and would really love to go to Greece.

THE SQUARE DUBAI BY BOTTEGA VENETA