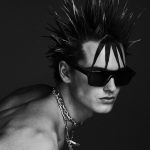 IN CONVERSATION WITH NOVA TWINS

Nova Twins is an English rock & punk duo formed in London in 2014, consisting of vocalist and guitarist Amy Love and bassist Georgia South. They have been gaining popularity for several years now with their ground-breaking, diverse and unique sounds and with brutal tracks like ‘Play Fair’ and ‘Taxi’, and an impressive stage presence. They won the UK Breakthrough Band award at the 2020 Heavy Music Awards.

Can you tell us a bit more about yourself and how you formed the band?

Amy: I’m Amy, I do vocals guitar. Georgia: I’m Georgia, bass guitar.
Amy: We have been a duo for a little while now, we’ve been family for a long time, always doing music together but one day, March 20th of many years ago we made it official that we became a duo, a band. Life-band-partners. We’ve been a band ever since. We came through the punk scene, around Camden, and Southeast London. We’ve played a lot of cool shows together, we eventually went on to play France, and then Europe and all the festivals in the UK, and it’s been great ever since.

Where does the name “Nova Twins” come from?

Georgia: The name came from “twins”, us being two, and we would say we’re very much in sync, and even before the band we were on the same mind path and had the same goals. And then “Nova”, it means new beginnings in Latin, and we thought it was a great name. And it also relates to Supernova, a ball of energy, so we thought it worked.

Who are your main musical influences?

Amy: Between us, we both are lovers of the noughties, nineties, R&B, your Timbaland, your Missy’s… That classic era for inventive music. Personally, I like a lot of glam rock and straight up rock, and UK garage and pop music and soul, cause my mom used to listen to that stuff as well.
Georgia: I love NERD, Kanye West, Timberland. When I was really young I liked Stevie Wonder and Donnie Hathaway and Mariah Carey.

How do you think your music style has changed since 2014 when the band started or do you strive for consistency in your music?

Georgia: I think especially this new album feels like we’ve kind of circled back to the beginnings. I think the first one we ever did you can hear the core elements of what Nova Twins is today even in that basic form of us just writing on a sofa. But I don’t think we have any boundaries, because we like to experiment with different genres as we love so many different areas of music. Whatever feels Nova is a Nova Twins song.

What do you believe are the pros and cons of the music industry?

Amy: A great thing about the music industry is that it’s the industry, the hub of a lot of great bands we know and love, the bands that everyone loves. Something I don’t like about it, that I guess we both don’t like about it is that it can feed on the underground, take the idea and kind of run with it with another major artist, instead of thinking “let’s collab with the underground artist” or “let’s give them credit”. It’s a bit cookie cutter sometimes – if there’s Adele, they’ll look for the next Adele, if there’s an Ed Sheeran, they’ll sign a load of the next Ed Sheerans, or the Arctic Monkeys, so that’s not very original.

After lockdown, not being able to perform, how does it feel to be back performing in front of an audience?

Georgia: It feels like the dream to be able to perform again, we live and breathe on the stage so it was really weird to not be gigging for two years. Now, being back we just love it and are so excited to hit festival season finally and be back on the ground.

Your new album will be released on 17th June, what was your creative process behind it and your inspirations?

Amy: We wrote a lot of it through the lockdown and so much has happened to the world and our personal lives, that we had so much to talk about and write about. Write a lot of feeling, and emotion. And we didn’t know what we were doing back then, all we could do was sit and make music together. And I think after the beginning of doing nothing and watching Netflix, we eventually got it together and were like “okay, the world’s not opening up anytime soon, let’s just start writing”. The first song that Georgia sent over in that lockdown period was Cleopatra, and it was such an instant banger. Then I wrote some stuff on top of it, and it was instant, that song, and gave us hope that “Oh my god, new music” and suddenly lockdown wasn’t just this isolated, insular place, it was our time to write to the album, and we did.

IN CONVERSATION WITH SAMUEL AITKEN