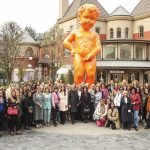 Hamburg-based marching Techno band MEUTE have been taking the world by storm in recent years. After breaking out covering underground singles such as AME’s ‘Raj’, the band have gone on to sell out shows and release a host of original music. They have just embarked on a bumper US tour which includes a debut in Coachella. They’ve also just released a new single, ‘’Infinite’, and announced new album TAUMEL, which will drop in November.

You can check out the new single here, and we caught up with the guys to see how they’re feeling about what is set to be their biggest year yet….

Hey guys, thanks for taking the time to speak with us. First of all, how has your 2022 started?

Hey – nice to meet you. The year started with the release of our new track ‘PEACE’ and the release of our next tour dates all over Europe and in North America. That’s a pretty good start. But we also had to postpone some more shows due to the pandemic, which is annoying of course.

You guys have just started a 21 date US tour. First of all, congratulations on that. Have you toured the US before? What are you looking forward to most about the tour?

Thanks! It’s our third time in North America. We already played SXSW, and we did our first North America tour in 2019. This one is much bigger. And we are most looking forward to raving and enjoying music with thousands of people again. We are very thirsty for the experience of real concerts after 2 years of the pandemic.

One of the standouts for the US tour must be your debut at Coachella across two weekends. What does that mean to you as a band to play at such a prestigious festival? Can fans expect anything different from you for those shows?

We are very much looking forward to this festival, because we know it has a tremendous reputation. Due to the fact that many people over there have never heard us before, we will be smart enough to focus on the pure essence: Blowing the people away with the hypnotizing power of our 11 piece techno marching band, produce endless confetti explosions in all their hearts and souls and create an atmosphere of resonance and harmony. Maybe there will also be some collaborations with other artists – but that’s still in the making and top secret.

You’re known for your high energy performances, and the visual spectacle you bring to your live shows. With so many elements to the band, how long does it take you to plan a tour and your performances?

We focus primarily on good music. At the same time our fabulous light designer is taking care of the preparation of the light show. Our sound technicians are improving the technical requirements and this is not measurable in days or weeks. It’s an ongoing process of development since we started on the streets of Hamburg.

For people who aren’t familiar with you, how was the band formed? It’s such an interesting concept, so i’d love to find out the origins of how the band came together.

The origins descend from the very easy and pure idea of playing techno with a marching band. Nothing more and nothing less. It all started as an experiment and a certain belief that the world needs that combination. In fact it still has the feeling of an experiment. But in the meantime the experiment reached another level.

You recently released ‘PEACE’, which we love, what was the inspiration behind the song?

The inspiration of Peace was to create a composition, which is as minimalistic as possible and yet unique at the same time. There was also the idea of finding a balance between a mesmerizing slightly melancholisch vibe, which is still fully positive. The feeling of inner peace.

The song is taken from your forthcoming album. How long has it been in the making? Is your release process different due to the pandemic, and it being more difficult to tour an album due to restrictions in certain countries?

During the pandemic we had a lot of time to record loads of new tracks and to bring the experiment into a new phase. The album in autumn will be the next big milestone for us.

What can fans expect from the new album? Is it a familiar MEUTE sound for your fans or have you gone for a new approach with this album?

We try to elaborate the essence of art with this album. It’s more or less like a culinary essence. You need enough time, love and passion for it. All this we put together and we are pretty sure that everybody will recognize the development our music went through.

Is there anything else planned for this year you can share with us?

When the pandemic has gone – what we are hoping for – our summer will be very full of loads of festivals and club shows all over europe: www.meute.eu/live

Thanks for your time! Finally, where can people go to keep up to date with the latest MEUTE news?

THE BICESTER COLLECTION – UNLOCK HER FUTURE : WOMEN IN THE C-SUITE