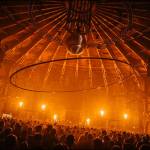 IN CONVERSATION WITH LOUS AND THE YAKUZA

Lous and the Yakuza is an artist shaking up the music and fashion industry. Her unique sound transcends pop, rap and alternative R&B, all while remaining faithful to her Congolese and Rwandan routes. Lous has the elusive ability to bridge parallel universes. A keen interest in Japanese culture, film and manga add to the unique concoction of influences that define her ever expanding scope of creative work. Lous’ second album, Iota, extends further into the personal, an ode to love and relationships, both family and romantic.

What music did you listen to growing up? How has this influenced the music that you make today?

I grew up listening to a lot of classical music due to my father’s preferences I guess. I listened to tons of Mozart, Bach, Beethoven, all of this growing up when I was very little because that was my father’s favourite music. Also classics like Bob Marley, The Beetles, The Rolling Stones, things of that nature. Aretha Franklin, The Eagles, a lot of African music from Senegal and Mali was also very interesting. Then growing up I started listening to hip hop because of my big brother who was a big fan of rap music and hip hop in general. He introduced me to that culture and it has influenced me today because I am a hip hop artist with a strong vision and sense for harmony and I think that is how everything came together.

Recently you have collaborated with other talented artists such as Joey Badass and Sfera Ebbasta, who would your dream collaboration be?

The theme of our October issue is metamorphosis. What does metamorphism mean to you in relation to your development from your debut album to your new album Iota?

It means everything I suppose. I changed so much from my first album until the second one. I would say, similar to everybody else, there is nothing really special about changing over the course of four years. Everybody changes over the course of four years. I changed maybe not in the core of who I am, but definitely my perspective on life. A lot of things have changed. I used to see the world as a much darker place than I see it today and also I accept darkness way better. Darkness used to be my way of life and way of being, that’s why my first album is called ‘Gore’. But now I just accept darkness as a part of life, there are other things in life but the darkness and everything changes, so the concept of metamorphosis is interesting in that sense. But I would say evolution is more fitting than metamorphosis because I did not change the core of who I am, I just evolved into who I was supposed to be today.

Your presence in the fashion world is ever growing, from walking for Chloé during Paris Fashion Week to becoming a muse of Louis Vuitton. Do you think that these alliances have transformed your own personal style?

They have not transformed my personal style because I think that I have always been versatile. Just by those two examples, there is so much difference between Chloé and Louis Vuitton. There is so much difference between Natasha, the previous Chloé designer and Nicolas, and that is just a big representation of who I was already and I am still that person. I change my style every day since I can remember, I have worn every single possible piece of clothing in the world I think, every type. Whether it is a dress, a skirt, a mix of pattern, monochrome, I have tried everything, loved everything and embraced everything. It is clearly a passion of mine to create a new style every morning that would just represent who I am. Every morning when I wake up I am a different person, and that person needs the proper outfit.

With your growing fanbase and Instagram following, do you struggle to balance your public image with how you perceive yourself?

I think we all struggle with how we perceive ourselves whether we have Instagram or not. I have friends that really don’t use Instagram but they have the same problem as people who use Instagram. Instagram is just like a little representation of reality. All day we all just try to portray the best part of us, in the street we are not crying or throwing ourselves on the floor. Even when you are just walking randomly in the street you try to walk straight, walk beautifully, have a beautiful style. The same thing that we see on Instagram that people say is so toxic is just the exact same in life. We hide as much as we can and we try to portray the best part. It’s just in real life we cannot hide forever, on Instagram we can hide forever. Until I die I could post a picture of me smiling. It does not need to represent reality but it showcases the same traits, the same toxic traits of reality. I would say that I don’t struggle with my own representation because of Instagram. I think that would be reductive of who I am. I don’t hang out on social media, it’s not really my thing. What I do though on social media is enjoy a good laugh, there’s a lot of funny content and I love comedy. What I watch the most are comedy videos or stand-up shows from comedians that I really enjoy. But all the rest is really just something that I don’t pay too much attention to. I love documentaries too on social media. It doesn’t get me conflicted about how I represent myself but I understand how it does for other people. A lot of people compare themselves to other people. I don’t do that, I never did and I never will because I think we are all so different. It would be such a waste of time for me to compare myself to other people because we all have insecurities, all have traumas and I don’t want to waste time comparing myself to other people. I just want to heal in peace and move forward, and that’s what I do. Social media doesn’t really have an impact yet, I guess, on me when it comes to representation of myself.

Your new album focuses on relationships, both family and romantic. Is there a particular track on Iota that means the most to you?

It changes every time. Now, at this particular moment when I am talking, I would say Hiroshima because of the lyrics. It’s still so relevant to my life. The lyrics are very personal to me and my personal experience.

If you could change one thing about the music industry what would it be?

I would change the amount of black women, I would add way more black women. I would put more women and black women in something different from what we usually see, in bigger positions. I want to see woman bosses, black woman bosses. It would change a lot in dynamics and the understanding of artists and the understanding of art. It would shift a lot. When you change the people in power a lot of things change. I’m not saying that I only want women or black women on the top, that would be very random because I think that you also need a certain level of skills but that does not require you to be a woman or a man but I would love to see more diversity most definitely in this industry because so far there are not a lot of black women. So that is something that I would love to see just for the sake of the culture. Black women shape the culture on the daily. Whether it is on the way we style our wig, our nails, everything. It has become such a big part of the culture and I feel like we should be more visible in the offices not only on stage. I would love to see that on stage and back stage. Just for us to come together as humanity we need diversity. That is what I want.

You have recently performed a European tour and shows in New York. What does performing live mean to you and your relationship with your fans across the globe?

Performing is kind of the end of the loop. You start with a thought, you put the thought in words, in writing, then you record it. You create the atmosphere, the music that comes with that word and then you give it away and people listen to it and then you go on stage and you perform it. Performance is the end of the loop, so it always feels so satisfying because you kind of feel like, okay, this is the end of this story. It’s a beautiful feeling. I love that feeling. It is also a moment of sharing my message, it’s a moment of pure enjoyment. I feel like I am 26 when I am on stage and the rest of the day I feel like I’m 84. When I am on stage I feel like I can be young again for a second. That is great. With the relationship with my fans, I think that I am pretty shy. I always have troubles explaining what they mean to me to be honest because it is such a specific situation. It is so special to have ‘fans’. The word ‘fans’ is so intense for me but I would say to have listeners, to have people that enjoy my music is a very beautiful feeling and I don’t know how to describe it really. I just love them. It’s very strange to love people that you have never met. There is a lot of people that I love and they don’t know that I love them and they don’t know that I know they love me. All we see between me and them is just numbers and strangely a number can mean so many things. When you see a number on your streams you are just like ‘wow’, these people are out there listening to me. It is just love, pure love, it’s a very special type of love because they relate to what I say. It is the most beautiful feeling, one of the most beautiful feelings in the world. I love them.

You are a role model to many young artists and creatives. What advice would you give to those who are trying to follow in your footsteps?

Don’t listen to me, listen to yourself. That would be the advice that I would give them. Because who the f*ck am I to give advice to people that I don’t know? I don’t want to say the wrong thing, I want them to just listen to themselves. That would be my advice. Basically not to listen to any of the advice that I would give them because this is how I made it, being myself, being reckless, making my mistakes, learning from my mistakes, not getting caught up in mistakes. This is how I did it. If my experience can help other people, I’ll gladly talk about it but if I had to give advice just like this it would be hypocritical of me because everyone is so different. Not everybody needs the same advice, not everybody needs the same thing. Maybe they don’t even need advice, maybe they just need to listen to themselves. I don’t want to be in a position where I dictate other people’s lives. Sometimes advice can be very powerful, so I would rather know the people and give specific advice. I cannot give advice to such a wide audience, as humans it’s impossible.

You are constantly expanding into other areas of creativity such as writing, designing and painting. What can we expect from you in the future?