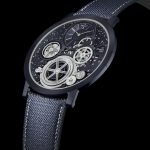 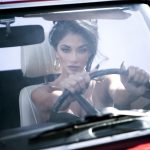 In Conversation with Kittin & The Hacker

Ending the pioneering duo’s thirteen-year hiatus, Kittin and The Hacker unveil ‘Third Album’, a new collection of euphoric and uncompromising anthems, crafted in their unmistakable style. Caroline Hervé (aka Kittin) and Michel Amato (The Hacker) are both iconic and influential artists in their own right. With four solo albums and countless EP’s spanning the last three decades, Hervé is as well-known as a DJ and producer, and Amato, a fellow legend of the French dance music scene has been making music since the late 1980s. Third Album’ sees the pair reprise the partnership that first propelled them to underground stardom.

As ever, Kittin and The Hacker wear their influences proudly, channeling everything from moody Drexciyan electro on ‘Retrovision’ and ‘Soyouz’, crunchy post-punk on ‘La Cave’, acid on tracks like the groovy ‘Homme a la Mode’, or euphoric New Wave on ‘Purist’, with its chorus seemingly lifted straight from a forgotten ‘80s club anthem. “We got back to the core of what we were doing, and what we do best,” the duo explained. ‘Electro storytelling. No compromise, no self-censorship, the contrast of poetry and irony.” Whichever route they choose, Kittin and The Hacker provide education in low-fuss, high-impact pop music, built with the bare essentials and ripe for the dancefloor.

After your thirteen years hiatus, what made you come back to the duo?

Kittin: It requires that amount of time to miss each other. Without any plan, we realize we have one album every decade, always thinking it will be the last one. We don’t count really. We always prioritize our friendship over that project, and quality over quantity.

The Hacker: We felt like working together again, there is a new interest in our music. but basically we wanted to make some new tracks . after the second album which was very poppy we wanted to go back to our roots, make something more radical and simple.

How does it feel to be working together? What do you guys take the most from it?

K: We know each other by heart. It is thrilling to see it’s still working so easily after all these years. I don’t think we experience that with anybody else and it’s a one life’s gift. I am always excited when he sends me the music, I know exactly where he leaves space for my voice, so the challenge is to surprise him (and myself) with my lyrics. Any collaboration is about stimulating each other, inspired by the other’s universe and take it to another level, to something we couldn’t do solo. Joining forces so to speak.

What can you tell us about your new collection “Third Album”? What does this album represent to you?

K: It’s basically the statement of who are today, radical, fearless and ironic story tellers. We always try to master our kraft, without pretending to do something else. Just going deeper in what we are good at. And push even more our own boundaries, keeping the freedom to explore genres, topics, sounds, especially in a world more and more formatted.

H: it’s really « us » like the first album but better maybe, more mature and confident. We just did what felt right to us, something more simple and direct.

Since your first album you marked an electroclash movement, you have always been so creative and innovative!! How would you describe your creative process when laying down new ideas and your workflow?

K: I simply get inspired by his music. When I first listen to his tracks, images come to my mind, literally. Then I try to tell the story, including elements we have in common, or society topics to take it further. Sometimes I am lost, I call him for advice or ideas, or I dig into my notes. But I always try to keep it spontaneous. We both know it works better when it’s instinctive, and the listener can feel that energy. In my recording, for instance, I make a point to keep the first take, I never spend hours rehearsing.

H: For this album, we talked a lot about it before we even made the first track. I wrote down musical ideas, atmosphere i wanted to create, and then everything came really quickly, that’s the magic of inspiration, when it’s here you have to catch it!

You have previously mentioned that you don’t really care about criticism or don’t listen to what people say. Do you believe that has given you confidence and made you into the artist that you are today?

K: You can’t please everyone, that’s a fact. Trying to please is a waste of time and energy, and certainly not why you become an artist. I do take critics from my close circle, as they are relevant and necessary. But it’s true I don’t rely on the outside world to know if what I do is good or not, as it’s only a question of taste. No artist is confident. That’s exactly why we are artists, to seek for it. I only gain it by doing it, by assuming my choices no matter what. Sometimes I fail, but I never regret it.

H: I do care about what people say, but it won’t change my mind. I have a very strong idea of what I like and what I want to do in music. I don’t really care about trend or fashion.

Our issue is about Balance, so how do you achieve balance in your daily life?

H: Being lucky enough to make a living out of my passion (Music) gave me balance!

IN CONVERSATION WITH NICOLE SCHERZINGER