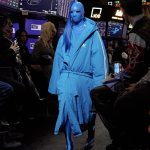 IN CONVERSATION WITH JULY JONES

July Jones is a brilliant Slovene and British singer, she makes alternative pop with a fierce & defiant edge. Her looks are creative and edgy. Her creative output has put her in a similar vein to be compared to the likes of Grimes and Ashnikko.
Aesthetically she is very distinctive, her music and message are outspoken, bold, and pushes the conversation around queerness, LGBTQ+ rights,  mental health, and relationships. Her breakout track was ‘Butterflies’ which featured Girls and Suzi Wu and went viral on TikTok. She is also an established songwriter having written for BTS, Zolita, and Nasty Cherry. July identifies as Pansexual and she is passionate and vocal about LGBTQ+ rights. July also performed for Slovenia at the EMA Eurovision this year.

Can you tell us a bit more about yourself and how did your music career start, when did your love for singing begin?

My name is July Jones, I’m an alternative pop artist, writer and producer. I was born in the Balkans, started music when I was 6 years old with piano and singing. My dream when I was little was to be in a gospel choir so when I was in high school I got a small scholarship to the states and finished my last year of high school there. While I was there I auditioned for Berklee college of music which offered me a scholarship but decided in my rebellious years that jazz wasn’t for me do I declined the entry into Berklee and moved to London with two of my friends when I was 18 years old. We thought having £2000 savings is going to live us a long time but quick realized that we had no money so I began by busking. I started to make friends in music so I would offer them to write songs for small amounts of money, and that’s how my journey began. I am now a writer behind so many amazing artist’s projects and have my own alt pop project which I’m very proud of.

Who are some of your major influences?

I’m solely focused on pushing the edges of pop music with my project so my main influences are Kanye West, 070 Shake, FKA Twigs, Banks, REI AMI, Charli XCX, Billie Eilish and so on.

What is your creative music process and how has artistry developed? How has your style changed to culminate in what it is now?

I started out in jazz so my style has definitely changed a lot! I used to focus on my roots and my voice a lot, I found inspiration in old classics such as Etta James and Nina Simone, I would have them hung over my bedroom everywhere. But over the years of writing clean pop music I started to be interested in developing and pushing what pop music can do. As a woman in production I think there isn’t enough women that are trying crazy production and staying away from the typical “clean pop” music structure, so my aim is to create a new lane of music entirely.

Who are some of your inspirations in the music field and in your life in general?

FKA Twigs i love her music mixed with imagery, 070 Shake always creating a new wave of pop music, Kanye West honestly my favourite musician in the world, the extend he pushed music to is where I’m trying to go. In life my influences are definitely daily life, I usually write very blunt and open about my problems with mental health, politics and love.

How was your journey coming out as a Pansexual? What were some of the challenges you faced while?

Before coming out as pansexual I actually came out as a lesbian when I was 16. Coming from eastern Europe we don’t really talk about queerness and especially not 7 years ago. I watched a lot of Ellen Degeneres and I realized nobody else was a fan of the show in Slovenia so I remember one day watching it and thinking, fuck I’m a lesbian. I then had a girlfriend with who we hid the fact that we were together and slowly came out later, because I didn’t know the terminology I found it super confusing over what I was so I went with lesbian. I am very feminine but I felt the pressure of wearing suits and boy clothes all of the sudden. After 1,2 years I realized that I like boys too so I was so confused, and only in the states learned all of this new terminology. So I realized I was pansexual. I think education is so important hence why I always talk about it publicly. I hope it can help someone else find themselves easier. I am now happily loving femininity and am so happy that can more openly than before.

What do you believe are the next steps when it comes to the LBTQ+ rights and community? What do you feel your place is when helping this community?

I think we focus way too much on the western countries especially UK and America. Its like two bubbles that seem like okay if we’re accepted here that’s all that matters but the reality is that other countries are still very backwards and we need to focus on providing education and support to that. So as a Eastern European myself I feel like that is my responsibility.

What do you believe are the next steps when it comes to the LBTQ+ rights and community? What do you feel your place is when helping this community?

I think we focus way too much on the western countries especially UK and America. Its like two bubbles that seem like okay if we’re accepted here that’s all that matters but the reality is that other countries are still very backwards and we need to focus on providing education and support to that. So as a Eastern European myself I feel like that is my responsibility.

What are some of your prospects for the future? Can you tell me a bit about any of your  future projects?

I have big plans. I am definitely aiming to make the July Jones project to be one of the biggest in the music industry and create my own lane of music. I have been the brain behind so many other artists projects for so long it now feels like the right time to show what I want to say. We’ve just released part 1 of my mixtape Silly Little Dream which has 2 continued parts 2,3. I’m currently on tour with Yonaka around the UK and in the summer very excitingly touring with Slayyyter around Europe. After that we’ll see where the music takes us.

To sum up, our last issue is about Balance! So how do you manage balance in your daily life?

I haven’t had that for so long but luckily as I’m from a nature country I can remove myself home next to the Mediterranean sea or into the alps where I just try to turn my phone off and never look at it for a week. I also have a routine, I do yoga every morning and try to keep my interests in other things like skateboarding and snowboarding so I don’t burn out on music. It’s tough though so I’m still learning!