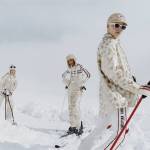 In Conversation With Jeff Mills

Detroit-born cultural icon Jeff Mills is a worldwide leading electronic music DJ and producer. The brilliant creative is a defining face of the Detroit techno scene, where he also began his successful career with the Underground Resistance collective he co-founded. Later on, he initiated his own label Axis, in order to gain artistic independence and pursue his own immortal electronic music compositions. Mills’ exceptional style ranges from a stripped-down and erratic sound to elements of industrial hardcore acid fused with his Detroit spirit. Today, Mills performs all over the world with around a hundred dates a year, but also is highly active in the contemporary art scene being part of numerous creative projects and continuously unfolding and recreating his unique artistic performances. In this inspiring conversation we talked about the development of the electronic music scene, his incomparable style and newly released as well as upcoming projects and much more…

After years of silence, the electronic music industry is thriving again and you’re coming up with many projects and gigs – how are you feeling these days and how is it going for you in general?

It’s going great. We’re busy with productions and many other conceptual related projects. Unstable or not, there is always something to do and materialize.
Even during the years of silence, we were planning for the immediate time as well as the best and far future. We utilized the time.

The electronic music scene has always been progressive, futuristic, and evolving – how would you say has the industry and our scene developed over the years, and in which direction are we heading in the future?

I suppose Electronic Music touched on all those things to a certain level and degree, but if I think about all the things we probably should have done, I’d say we’re currently a genre of Music that doesn’t produce at our highest and greatest potential. That just “OK” is good enough in most cases.

Of course, I’m optimistic for the future of music but, I have to be honest and admit that I have doubts. Not just about the lack of creativity, but also the protection of artists and their work, the complicated and ever extending manufacturing process, the rising costs of shipping products and many other aspects that the public doesn’t realize.

What do you think are the role and values of electronic music in today’s generation, where does it stand in our society?

The practice and creation of music is not designed in a way that someone or anything can be pinpointed and singled out because it’s always changing.
For example, one shot wonders. We, the listeners are always changing. What I can say is that the elements for which one can use and express themselves through music is still here absolutely functioning. When someone creates something from nothing, that’s always a good thing.

Your recent album Mind Power Mind Control explores the art of mental persuasion, to control and alter the human mind – which sound techniques did you apply, and in what way are they able to influence our minds?

I chose a transcendantal approach. Organizing the sounds and rhythms in ways that would pull the listener into the track. Once in, then certain things be revealed (subtly). It’s a work of manipulation and not necessarily for now and today but perhaps something to help others to look back and reflect on. The emergence and current state of social media will be considered a turning point in history in many ways.

Time has to pass to really see how it’s affected us. I predict by the early 2030s we should start to see real signs.

You recorded The Paradox compositions with jazz pianist Jean-Phi Dary – how was it working on this project together, your compatibility, and communication to explore and dive deeper into the sound?

To improvise and play based on how I feel is really the best thing I can do with music so, each and every experience with Jean-Phi is like enlightenment. We’re exhausting feelings through sound. There are no mistakes or errors, just honesty.

It’s also a joy because Music is an endless learning process and one never becomes the best or worst because that doesn’t exist. Musicians and artists create to occupy the mental space of others. This is an honor, not a job.

Mixing different elements and genres like techno, electro, dance, jazz, and soul, you’ve always been experimenting with sound, style, and different machines. What does this sound diversity mean to you?

Any and everything is relevant. Whatever it takes to extract the feelings is what I consider so, I’m always on the look out for how people are doing (mentally). For example, when Electronic Music becomes too predictable, I considered the opposite and the best examples and techniques about freeing oneself through music comes from Jazz. Or when I thought we should begin to see what Techno could look like, I became more interested in film and moving images.

You are always playing on numerous stages all over the world. Recently, you performed at Neopop Festival in Portugal – how did you experience its identity, crowd, and playing on its stage?

Yes, the Neopop Festival was another highlight of this year for me. But, I have a very long, discreet and intiment relationship with Portugal that goes way back to the 1990s. I’ve always loved the country and culture. To play there is always something I’m looking forward to.

As a multimedia artist and curator, showcasing high-concept presentations in art galleries and avant-garde cinema, what medium would you like to explore further?

I’m still very interested in film and moving images. I think that there could be a strong conversation between Electronic Music and film if only more Music and film producers considered the relationship seriously.