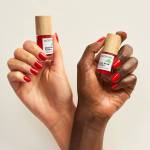 Jara, Saudi Arabia’s stylish “halalified” storyteller with a voice to be heard. She’s an activist, a student, and a rapper. Her latest single, “AFA,” describes the various facets of being a woman and going against the status quo; in the song, AFA is slang for “let me show you what we can do” – more than one thing and do it well. Jara is paving the arab hip-hop wave in the Middle East and proving that she can do it all, from directing her own videos to studying abroad. After hearing her at one of the panels during the XP Music Futures conference (MDLBEAST) I was curious to know more about her perspective on music, latest projects and challenges.

Hello Jara, how are you? And how is it to be here at XP Music Futures? Tell me, what’s going on for you right now?

This is the first time at XP and the first time I am speaking somewhere; I’m usually performing, but now it’s more about networking and music. So it’s an excellent experience. I like talking and being able to have a voice. I enjoy that more than making music because you also serve as an activist. Yeah. Yeah, exactly.

In terms of activism, what are some of the thematics you speak up about?

I would say about being a woman and being a POC (person of color), mixed race, and all these things. What I always say, I like people to label me. So whatever they feel like I represent, I represent. So not a specific title.

So, tell me a bit about your experience at the beginning. How did you stumble upon making music and then kind of move to rap and create in the first place?

It all happened by chance. I didn’t really plan to go into this field.  I just fell into it. I was living in Sweden, and I was pretty much alone most of the time. So I started writing music on my phone, notes, and stuff. And then, one day, a beat was playing. I was like, Okay, let me try to freestyle. Let me try. And I was like, this sound doesn’t sound bad, I then showed a few friends, and they said it sounded pretty good. So I started doing it just for fun. I started writing in Swedish and then in English.

So I moved there after I finished high school here. I stayed there for three years. When I was there, I learned the language in six months, primarily through music. I was listening to Swedish rap and was influenced by that. I started writing in Swedish and later in English, but my music wasn’t reaching many people. I realised  I needed to do it in Arabic because of the audience here. So Arabic was maybe like the last two years, and English was four years before that.

I love to break the stereotypes because many people still think that Saudi women are not educated or that we don’t have freedom. I feel a lot of people are still shocked that we can go out or drive. They would search on Google and get searches from 20 years ago, but now we are clearly way more advanced than what the media has been showing before.  Yeah.

Yeah, how did you experience that? And how has it changed?

Stereotypes are always there. But I always like to use the stereotypes to my benefit and break them. So, for example, in one of my songs, Afa, my latest track, it’s me taking the stereotypes and prejudice on Arab women and showing different skills: I can cook, but I can also do this and that and study. It’s not like saying that women shouldn’t be moms. As women we have the capability of multitasking and that’s a trait we should definitely be proud of, we can do multiple things and excel in all the things we set our mind to. I try to share that you can do anything you set your mind to and prove that you can study and do what you love. I’m doing my master’s in political science in Sweden, and I recently graduated from Saudi double major in international relations in psychology.

That’s wonderful you are also putting time into your knowledge and studies! What made you go to Sweden and eventually return to your Saudi roots?

There was a lot of back and forth. I went to Sweden after graduating high school and did one extra year there, a pre University type thing. I then realised everything was Swedish, so I was trying to learn the language and accommodate. I’m an only child and living alone in Sweden was hard on both me and my parents so they decided it was best for me to come back home for a while. It was mentally and physically draining so I chose to come back to Saudi for a while to reset before I go back to finish my masters in Sweden.

Brilliant. Who works on your productions?

I’m part of a label now named Vibe Music Arabia. Before that, I was super against working with anyone. I would do everything on my own, including the direction of my music videos, because often, if you depend on someone, the project doesn’t come through as you wanted it to. My music video, “966,” was shot for national day. I thought of the idea. Wrote the song. Found the music video one week before National Day, before I released it. When I told the videographers and the crew about the idea, they answered that it would be impossible to finalize it because of the lack of time and money. I was able to pull it off in the end on my own, but today I’m grateful to finally have a team that supports me. But for a long time my mindset was do it yourself or it won’t get done.

Can you tell me a little about your creative process while creating a new song?

Most songs, 90% or 80%, are recorded at home. I don’t have a studio or anything; sometimes I sit with my head under a blanket to record, and I actually like that my recording process is simple, not everything has to be complicated. People make it seem like you need a lot of money to make a studio. I have a young friend who’s also a rapper, Little G Fresh, currently living in the US, and she mixes the tracks for me. So I like it to be fast and just simple. In terms of writing lyrics, if I have an idea, I’ll sit for 20-30 minutes, but usually, what I try to do in all my songs is have a  message to spread. I love the idea of storytelling through my music and my goal is to include things I’ve learnt from life and through my studies of psychology and political studies through my music. I like to rap and speak with purpose.’

I want to spread awareness on a lot of things. In my music video ’966’, I talked about racism a bit and about how we have a lot of POC’s, people of color and a variety of ethnicities. There’s a lot of racism towards Saudis, people who don’t look Saudi get a lot of comments if they are light-skinned, dark-skinned brown skin, yellow skinned. Saudis are usually mixed and their roots come from all around the world. So I tried to put that in the music video and include all the types of colors, always remaining careful not to be too direct but finding ways to express my feeling towards this topic. Another thing that I like to aspire to speak about in the future is mental health. I think that’s very important, and people don’t discuss it enough here. I try to talk about depression and the inability to write music or create. People should normalize this.

I know I need to do light things so people enjoy them, but I also want to address more profound subjects.

What is up and coming for you now?

I think I’m getting a lot of support. Of course, hate is inevitable there. Now it’s the time to be a  woman and to get attention. I’m glad I came up at the right time. People are giving us a platform here, so I’m grateful.   What’s nice is I plan on releasing more music and hopefully reaching more people internationally. I would love to play in the Netherlands someday, for sure. Also, my next goal is to start a streetwear brand.

Modesty is what I value most. In Arabic, the word hijab comes from the word ‘Hishma’, which means modesty. To me I believe it’s not about how you cover it’s about what you cover. So oversized fits are always my go to.

I absolutely love your style. Do you have a stylist that works with you?

Thank you! I was still wearing the hijab and I got a lot of racism when I was there for wearing it, so I decided to wear a hoodie and cover my hair. I also have a lot of respect for the hijab so I don’t feel comfortable rapping with a scarf on, so instead I choose to still be modest and wear a hoodie or beanie. Modesty is what I value most. In Arabic, the word hijab comes from the word ‘Hishma’, which means modesty. To me I believe it’s not about how you cover it’s about what you cover. So oversized fits are always my go to.

What are your expectations for next year?

I want to do more performances. I’ve been told I’m extroverted but I believe I’m more introverted. I’ll make the songs and videos and release them, but I want to start doing more live performances and interacting with the crowd. I’m always ready to work and collaborate, and I prefer working with other women, so if anything comes up next year, it’ll probably be with another female. I believe it’s our time to shine now, and female empowerment is a movement that we should all be supporting.

NADA ALHELABY AND HER TAKE ON THE MIDDLE EASTERN ENTERTAINMENT SCENE