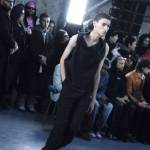 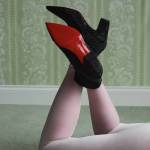 IN CONVERSATION WITH FERNANDO VALDIVIELSO AND MILENA SMIT

The actors Fernando Valdivielso and Milena Smit met in March 2019, when they both participated in the film Cross The Line (No matarás). She was making her debut as an actress and he offered her a hand, that four years later she has never let go. Now that they have become two of the most sought-after talents of their generation, both meet to look back on their friendship and plan for a bright future.

The fist of the actor Fernando Valdivielso pounds on the door of a room. Possessed by brutal and raw violence, his yelling is heard on the ninth floor of this building on Madrid’s Gran Vía, as a young woman enters the same office. She is Milena Smit and she does not know yet, but on this afternoon in March 2019, she is about to become her fictional accomplice. A few minutes later, when they both embody a couple in a monumental fight imbued with alcohol and drugs, the casting director Alejandro Gil sees it crystal clear: they both become Ray and Mila in Cross the line, the David Victori film that won Mario Casas the first Goya of his career and got two nominations for Milena and Fernando for Best Newcomers actors. “I was rehearsing some scenes when Milena walked into that room, it was like witnessing a wild beast come in and fill up everything. When we finished reading our lines, we were both crying and with a lot of rubbish shaken out from our bodies”, recalls Valdivielso. Four years have passed since that meeting and today, sitting in the same room where they met, both interpreters have become two of the most trendy talents of their generation and also close friends who seem to speak in their own secret language.

Milena Smit remembers every detail from the shooting of that film through the streets of Barcelona. Mainly because until then, she had never participated in one. “At that time I used to work in a hotel, in Opera (Madrid), and I had an Instagram profile just as tacky as me, in which I would sometimes post photoshoots with photographers or slightly dark stuff” she recalls with a smile. One day, Smit opened her Instagram DM inbox and read a message that said: “Hello. We are casting for a film produced by Filmax. We are looking for girls with your profile, if you are interested in this type of production send us your phone number so that we can contact you”. After receiving a sheet with the dialogues from Mila’s character and sending a first videotape that she remembers with some modesty – “I recorded her (Mila) in her underwear with a table full of cigarette butts and glasses with remains of Coca Cola”. Valdivielso still remembers seeing her arrive to the audition dressed in a bomber jacket, fishnet stockings, and a black T-shirt. “She had such a punk attitude that there was no way she wasn’t going to be good. And she nailed it, leaving us with our jaws dropped. But time has shown me, even more so, that Milena is not from this world”, he concludes.

This friendship of the two actors was not predestined if it had not been for that afternoon. Smit, raised between Murcia, Torrevieja and a small town in Alicante called Torre de la Horadada, had lived without any major cinematographic influences and in a family where none of its members had dedicated themselves to acting. “Being an actress was neither a childhood dream nor a professional goal. As a child, I wanted to be a vampire”, she laughs, although the plans that awaited her were different. Since Cross the line, fashion and beauty contracts have rained on her – she is currently an ambassador for Saint Laurent, as well as Cartier and each choice on the red carpet is subjected to scrutiny more typical of Hollywood than Spain. She has shined under the orders of Pedro Almodóvar in Parallel Mothers and Luc Knowles in the dramatic Dragonflies. In a few days, on January 27th, Netflix will release The Snow Girl, a series where she is the absolute protagonist.

Valdivielso, however, began making a living as a teenager with TV commercials – “I made my debut in nothing less than a Filipino (Spanish brand of cookies) commercial” he narrates amused, and entered the Royal Superior School of Dramatic Arts in Madrid as soon as he reached the legal age. Since then, he has appeared in more than thirty projects, from phenomenons such as Señoras del (h)AMPA or Cuéntame cómo pasó to films like Hasta el Cielo by Daniel Calparsoro or Venus by Jaume Balagueró, recently released in theaters, and the feature film Asedio, soon to be released.

And although his career has been as impeccable as it was gradual, the ups and downs of an unstable profession got the best of him at some point. “I combined occasional roles with night jobs in pubs or discos and having that kind of life, it is impossible not to lose yourself from time to time,” he confesses.

Leaning on his shoulder and holding his hand, Smit seems to understand what his partner is talking about. “To give you some context, the week we went to release Cross the line in Sitges Film Festival, I was starting the casting process for Parallel Mothers without knowing that it was a Pedro Almodóvar film, which they did not tell me until I went to do the last screening test with Pedro. In addition, I was just beginning to shoot the Netflix series Alma in Asturias, northern Spain, and the awards season began, with all the nominations and press. I used to leave the house at 6 a.m. and come back at 2 a.m. With luck, I would sleep three hours a day.” Although she tells the story with a smile, Smit acknowledges that that routine led to an unsustainable situation that endangered her mental health. “When the filming of Parallel Mothers wrapped up, I started shooting Dragonflies and began to study the script for Tin & Tina by Rubin Stein, without a single moment to rest and reflect. One day, I had a panic attack and the anxiety became quotidian. I ended up complying with everything without being present for anything. Added to that, there were personal issues that made me fall into depression”, she says in one go.

At Smit’s worst emotional moment, Parallel Mothers gave her her second Goya nomination and took her from Madrid to Venice and New York. “I was living a dream and I wasn’t enjoying it. It wasn’t anyone’s fault and I think it was a huge lesson to learn. I forced myself to stop until I found a formula where the great things that work brought me could coexist with my mental health. It took a lot of therapy, as much time as I could possibly be at home, and the promise to myself that I would never say that I was ok if it wasn’t true”. The shooting of the series The Snow Girl between Malaga and Madrid was like being able to breathe again and she found relief. “It helped me because in addition to connecting with the crew, the character of Miren is quite alone and I had time to think and relocate my emotions inside. Now I can say I feel good and I no longer live with anxiety or depression”, she says. Valdivielso remembers that process well, alluding to stages in which the phone does not ring as much as an actor would wish for and the undeniable challenge to their self-esteem that this entails. “This is a profession that takes you to the top and brings you down to the ground without mercy or safety mattress. There are times when it gives you a character like Ray in Cross the line, which gives you so much more than what you would ever expect, but there is this other times when you film something very promising that you think it could be a huge success, a breakthrough role in your life and nobody watches it. It has happened to me recently. It is impossible for that not to leave you a little knocked out”. Smit looks at him with admiration, nodding at the chance of similar ups and downs to come in her future.

At present, something that also unites them is a very personal taste for fashion and aesthetics. “Growing up, I used to dress up and put on shows for my family. And as a teenager I went from emo to goth to hippie to chavvy as the wind blows” recalls Smit. “That has made me build an alter ego that changes like the day, and when all the red carpet paraphernalia began, my obsession was not to end up wearing the same princess gowns as everyone else.” Luckily, she found the perfect partner for her intentions in stylist Freddy Alonso. “I let him do and he lets me do”, she tells about their work process that has led them to choose models by Olivier Rousteing for Jean Paul Gaultier, Paco Rabanne or Balmain, who last February designed a unique piece for her to wear at the Goya Awards. “It’s funny because in those kind of situations, I don’t feel like I’m the one who’s posing in those places or speaking in those interviews with the TV and press. Then I come home and I’m like “Damn, I can finally be me again”. Something similar happens to Fernando, although he states that with his size it is almost impossible for him to dress in sample clothing. “Basically because, with the exception of very few, brands don’t usually cut for men like me,” he says, although that hasn’t prevented him from wearing suits by Gaultier, Duarte or Palomo Spain. “I like to dress for a gala as I like to dress for a movie: with the sole intention of having fun and camouflaging myself for a while.” That is precisely what he did in Venus, Jaume Balagueró’s latest horror movie, where he stars along Ester Expósito as the lead. Balagueró, who in 2007 rewrote the genre in Spain with the REC saga together with Paco Plaza, puts him back in the villain suit in this film, but the actor from Madrid confesses that in the future he would like to incarnate not so evil characters. Smit agrees and both concur on how the process of accepting or not, the projects that arrive through their agent, Carlos Ramos, usually works. “When I like a script that arrives, I practically borderline on obsession,” she admits as she laughs. “For me, it is important that I get away from what I have done so far. I am not such a bad person, I am not so vicious, man.” he replies sharing the joyful mood. The two actors and friends merge into a complicit laugh and you can feel how all the early-morning and long days of shooting, the partying nights, the bullet-proof trust and bad streaks shared has shaped their friendship. Smit couldn’t define it better: “I wasn’t even an actress when I met him. He could have just been a co-worker and not made it easy for me, but he chose the opposite path – embrace and help a girl who had no idea what she was doing. I think that’s the best quality a friendship can have, in this profession or any other.”