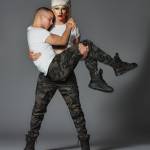 Dafne Keen, 2018 Screen International Star of Tomorrow, is known for her role in the ‘X-Men’ franchise ‘Logan’, which was Oscar nominated for ‘Best Adapted Screenplay’. Dafne has led HBO’s highly anticipated adaptation of Philip Pullman’s ‘His Dark Materials’ for the past two seasons as Lyra Belacqua/Lyra Silvertongue. The highly anticipated season 3 returned on HBO on 5 December, and is expected to premiere in UK on 18 December.

I think it’s hard in the physical sense, in the sense of having to move around all the time and getting used to new environments. But I think as long as you know your character well enough, you can adapt their reactions to the world that surrounds them. So it was very helpful for me to live all of those sets in a way and I think the confusion of where you are is kind of part of it. But like I said, as long as you know your character, you know how they’d react to things.

You star in the series as Lyra, an orphan living with the scholars at Jordan College, Oxford, in a world governed by the Magisterium, a religious and political body. Lyra discovers a dangerous secret and is the subject of a witches’ prophecy that she will change the world. How would you describe Lyra’s journey through all three seasons?

What can the viewers expect from the third and final season?

In 2017 you starred opposite Hugh Jackman in ‘Logan’ from the ‘X-Men’ franchise. The film is considered to be one of the best superhero films of all time. How has the experience of being cast in this film impacted your career and you as an actor?

Being cast in that film has forever changed my life and I am so wildly grateful for it. First of all, getting to work on a film set with the geniuses that I got to work with has been the biggest honor I have ever lived. And then aside from the experience itself, the doors it has opened for me professionally has been wild. I’m so privileged for having had that opportunity. I worked really hard to get that opportunity. It’s so hard to make it in the industry and I think it’s one of those roles that kind of lifts you up and that helps people see you, which means they cast you in things. I’ve been wildly lucky that I got that opportunity at 11, which has really helped me get other roles.

It was a bit less nerve-wracking than it is now for me, because at nine you don’t really know what’s going on, you’re a bit in your own world. I remember I was completely uninhibited and I wasn’t shy and I was so happy on set. I am still so happy on set, I’m not saying I’m not, but it was very innocent and I didn’t really realize I was working, which was really lovely. Also, I think that happened because my parents were on set, so it kind of felt like I was just chilling out even though I was learning lines and I was working. But I love it so much. That is what they say, if you love what you do, you’ll never work a day in your life. And I got to experience that at the age of nine.

How much did your parents both being actors impact your decision to become one as well?

I think every decision we take is impacted by our surroundings. And I think the fact that both my parents are actors has definitely been a huge part of why I become an actress, because the respect that I have for acting and for film and for theater, 100 % comes from them. From seeing them create my whole childhood, for seeing them go into rehearsals and seeing how hard it was, I don’t think I ever had this idealized idea of acting that I think lots of people do have, where they think it’s just showing up and doing red carpets and things. I’ve always seen them and what they do. I remember seeing them writing until 3 AM and reading scripts and I remember my dad falling asleep on the sofa with the scripts in his hand cause he’d stayed up all night analyzing it. And I’ve just learnt this immense respect for creation and for arts and for acting and that’s 100 % on them for showing me that world and for introducing me to it and for allowing me to come onto their sets and to be in their rehearsal rooms and to meet other actors.

You’ve been nominated for many awards, like BAFTA Cymru Award for Best Actress in 2020, London Film Critics Circle Award in 2018 and won ‘Best Female Newcomer’ at The Empire Awards in 2018. You’ve received a lot of critical acclaim and praise for your performances. How does it feel to be recognized so highly for your work? And how does this recognition impact your future work?

It’s wonderful when you’ve worked hard on something and people recognize you for it. When people give you credit for it, it feels wonderful. And I’m very grateful that I’ve been able to even stand in a room with the people that I got to stand in and be mentioned in the categories that I was mentioned in with all of those wonderful actresses and actors. So that’s been a huge honor and I think sadly in our industry, the fact that you have awards does open up lots of doors for you. And I am very lucky in that regard, cause I think it has opened up a lot of doors for me.

You just joined the cast of Lucasfilm’s series ‘The Acolyte’, a ‘Star Wars’ mystery-thriller that will take viewers into a galaxy of shadowy secrets and emerging dark-side powers in the final days of the High Republic era. How excited were you when you got cast on a ‘Star Wars’ project?

I was extremely excited. I got cast in a very surreal place. Physically I wasn’t in my house, I got told when I was on the street and I literally had to repress screams cause I was on the street. Obviously I couldn’t start shouting I’m on ‘Star Wars’.

I’ve watched the film since I was seven, I watched the first film with my dad. We went to a video store and we rented the film, when video stores were still a thing, and we just binged the entire saga in one weekend. I think there’s even a photo roaming around the internet of me dressed as a Jedi, cause that’s how big of a fan I was. So I was extremely happy. And I was very happy that I was getting to fulfill little Dafne’s dream in a way. So that was very fun. It’s very fun in general right now.

What kind of roles or projects do you look for in your career?

I look for interesting, complex new roles. I look for things that I’m gonna have fun creating. And I don’t wanna do the same thing over and over again. I try to make my characters as different as possible. That’s a huge thing for me.

What makes you feel most accomplished as an actor?

I think being on set and getting to work alongside the wonderful crews I get to work with for sure.

Special thanks to Public Eye Communications

IN CONVERSATION WITH BORIS SCHREURS, ‘MY LITTLE PUNY’ ABOUT KAMP VAN KONINGSBRUGGE