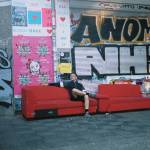 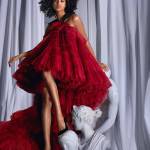 IN CONVERSATION WITH AMBER KUO

Amber Kuo is a Mandopop singer and actress. Her debut in the entertainment industry took place in 2006 with an appearance in music videos for Taiwanese singers. The following year she launched a solo album called Invisible Superman and a couple of years later her journey in the film industry began with Au Revoir Taipei, for which she was awarded the title of Best New Actor.

Many productions later, Kuo continues to surpass herself and has received recognition for playing Gu Li in the film series Tiny Times, as well as Thalia in L.O.R.D.: Legend of Ravaging Dynasties. After a five-year break, Amber is focusing on her music again with the release of the album Vol. 13-1986 The Journey of Sleepless Sheep whose main inspiration, she says, was pain and time.

You have set foot in the entertainment industry with film, music, fashion and modeling, which one sparks the most interest in you?

At the beginning of my career, the transformation of different identities can inspire me. First as a singer, then as an actor. The shooting that I can call “fashion” is relatively late. This is a very interesting and circuitous linear development, and now, I went back to music with a lot of nutrients. I will stay where I can create completely.

You have participated in many brand collaborations, such as Bulgari, Armani Beauty, Givenchy and Ami Paris. What is the most exciting thing about working with different brands?

There will always be some similarities that connect us, which is what makes me most curious to observe!

As an actress who played various roles, do you have a character you enjoyed playing the most so far?

There is a big difference in character between for instance your role of Gu Li in Tiny Times and Thalia in L.O.R.D., how do you get into character?

No matter how much preparation I have done, I will have to be more patient till that I am the person I play in the eyes of someone who has a conversation in a certain scene on a certain day. At that moment, it will make me excited all day, because I am really in the character! In life, sometimes we confirm who we are from the people we are with.

For example, a long-distance daughter, a beloved lover, to develop the most three-dimensional understanding of identity.

After five years of rest, during a period of isolation, you released the album “Vol.13-1986 The Journey of Sleepless Sheep”. How does it feel to be back and what inspired you?

The kind of feeling that I suddenly got pregnant and gave birth to another feeling of my own! It was time and pain that inspired me.

Is there any particular song in this album that you hold dearest to your heart? If so, which one and why?

The most special to me is Nakuna 泣くな, because it recorded my thoughts of climbing out of a pile of pizza.

You went on a National Tour around Shanghai, Guangzhou, Chengdu, Wuhan and Kunming. How is it to be on tour and what was the most memorable moment?

The tour was as much fun as imagined but with unimaginable difficulties because of the epidemic at the time. I am more often immersed in the context of my dreams and the most unforgettable thing from this tour was the audience who can talk the same dream talk with me!

Where do you mainly get your inspiration while creating new music?

Most often because of an emotion. Then I set a song title, and then have a frame for arranging music, the rest comes with it.

The theme of this issue is Metamorphosis, what comes to mind when you hear that word?

The perversion of nature. Drastic transformation and complete metamorphosis after a time of pupation.

What do you believe has been the biggest change for you this year?

The biggest change is that I made a lot of new good friends!

What is next for you in the near future? Any exciting projects coming up?

The near future means every tomorrow. We should live today well before each tomorrow comes. I’ve been living well…

In stores at the beginning of November.

IN CONVERSATION WITH FREDDY K

IN CONVERSATION WITH IMAAN HAMMAM