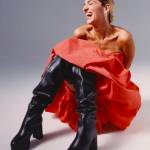 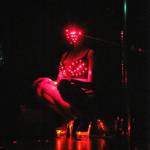 Sweet Harmony – Out of the Underground shows works by artists who come from rave culture or are inspired by it in their practice. Their artistic expressions touch upon the spiritual and mythical aspects of rave as well as rave as a space for (queer) play and resistance. Sweet Harmony exposes the emergence of rave culture worldwide, while highlighting the artistic heritage of the Dutch club culture. The Amsterdam nightclub RoXY, the Gabber halls of Rotterdam, and the Zaandam venues De Waakzaamheid and Hemkade 48 played a significant role in the development of acid house and gabber throughout the ‘90s.

Taking place in the underground shooting range of the former bullet factory in Zaandam, Sweet Harmony aims to captures the energy of a rave party, while simultaneously shifting focus from the music towards the visual art practices that emerged from it. The exhibition brings together newly commissioned and iconic artworks of more than 40 artists and collectives, capturing the intensity of rave and its social and political resonance.

RoXY – one of the most iconic nightclubs in the Netherlands – introduced house music to Europe and burned down in 1999. For Sweet Harmony, original Club RoXY Family members Joost van Bellen and Inez Gielede Jong have compiled a true Wunderkammer, in which they bring together many of the lewd and lascivious artworks and memorabilia that once inhabited this inner-city nightlife gem. The installation – entitled Reminiscing the Artwork of the Radical Outlet for the Xenomaniac in You (R.A.R.O.X.Y.) – reminds us how nightlife and rave itself is a fertile platform for artistic expression in various forms and degrees

A younger generation of artists is just now finding their artistic outlet within the realm of techno and rave. Alyson Sillon has noticed that, during two years of Covid lockdowns, nightclubs and parties were shuttered while religious gatherings and ceremonies were deemed ‘essential’. In Before/ After, Sillon exposes the spiritual and ritual undercurrents of queer techno events in the form of a clock that captures the cyclical and transcendental nature of rave.

Artists Aukje Dekker and Gerald van der Kaap have developed a new work entitled Buzzclub Sexyland 2022 (Screentest #9), for which they filmed young clubbers dancing in a neutral setting, creating an insightful portrait of youth life. This work is a direct reference to the screentests that Van der Kaap and Rineke Dijkstra recorded between 1995 and 1997 in venues like the RoXY (Amsterdam) Hemkade 48/MysteryWorld (Zaandam) and the Buzz Club (Liverpool). Dekker, whose practice evolves around questions of authorship, citation, copyrights, and the value structures underlying artistic practices, asked herself: what happens if we recreate this experiment in 2022? 25 years after the original piece, she invited Van der Kaap for another set of screentests. The resulting video installation presents a new time document, recording the impact of social media as it turns us into roundthe-clock performers.

Artist and choreographer Michele Rizzo is interested in rave culture and its relation to dance and performative practices. His recent choreographies HIGHER and REACHING (performed at Stedelijk Museum and KW amongst others) capture the balance between the individual and the crowd, and between grounded repetitive beats and ecstatic transcendence within the context of clubbing. Het HEM presents a different kind of work. Rest (2021) is a sculptural installation of four reclining ravers stretched throughout our darkened tunnel. It marks the importance of pause and stillness, of quiet reflection, as a counterpart to the physical eruptions on dancefloors. Moreover the visual reference to catholic Easter processions – recurrent in Rizzo’s native Southern Italy – articulates the apparent connection between rave and exalted spirituality.

& OTHER STORIES INTRODUCES SAVOIR, A LIMITED EDITION LINE THAT HONORS THE KNOW-HOW OF ITS DESIGN STUDIOS