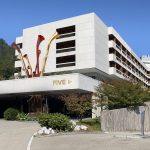 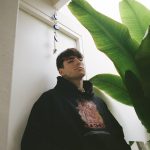 With a light step, she moves forward enfolded in a second skin knitwear that is a play on transparency. The chain on her belt makes a faint sound: is that a bell? The words, perhaps, are somewhat lacking. Then, as she walks by, an image comes to mind — something like the marriage of ancestral techniques and a future that has yet to take place: Equestrian Techno. A contradiction? A necessity, rather.

But she doesn’t like labels. They are comforting, but so what? This afternoon, she would prefer to rely on the transformative, on self-fulfillment. She sings to herself a song that wields the all-powerful paradox to capture the passion and doubt with mordant irony, the better to reject one-size-fits-all solutions. The very existence of such a song delighted her; the beauty of such righteous uncertainty would no doubt inspire her. And she would remember it when the time came to pose an exhilarating, overwhelming question: where will we be heading tomorrow? Before answering this sphinx-like riddle, she runs her hands over the zipper of her jacquard coat. In French, as she well knows, the pull strap is called a dragonne.

She smiles, reminded of her inner power. For she will begin by endeavoring to discover that which has never before been heard. She will explore. In the guise of a dragonne, alchemist, or Amazon. She will venture forth into the streets, summon apparitions, reveal marvels, unearth secrets. Treasures are everywhere to be found… but where? Where? Wide-eyed, happy, she will walk vaporously ensconced in a loose-fitting, lichen-blue sheepskin reversible coat — powerful, in synergy with her own intensity. She will walk, hoping to bring back secret beings from their hiding places. To do so, she will opt for magical thinking. Those that appear to her will either be deeply solitary or on the contrary will belong to a community of bodies; a community swept away in an eternity of colors. She will track them down day by day, increasingly ethereal, often sheathed in a ballet neck faience-blue jumpsuit. She will haunt the streets as one is haunted by time.

She wants — she has wished it — to bring them back intact, all of them, and more provocative than ever. Who exactly is she thinking of? She is obsessed with a handful of feline women who hung out in the cellars of the Paris Rive Gauche in the early 1950s. A gang of fearless girls whose nickname was the “voyelles,” who were indomitable, and who each night changed the very definition of freedom and femininity. These “voyelles” — these riotous girls — were very gifted in the art of doing the opposite of what the outside world expected of them. One in particular, went further than anyone else. She painted, danced, loved, and experimented before deciding she had sufficiently displayed her person; she had had enough. It was now time to avoid the gaze of others. She left her generation in the middle of the night to retire to a sunny Italian island.

Now that they had returned, more audacious than ever, it was of the essence to welcome and be worthy of them — first and foremost through gestures, by extending the mark they had left on history. Wearing an off-white silk leotard with a jabot collar, she would now play by her own rules. She had no need for anyone else’s, which was a good thing. Today she would ask an additional question. She had an urge to make tomorrow surprising.

Inventing a new subversion always means going against the grain. It hints, very strongly, at the boldness of the spirit. It is like wit, like flow: like the belts and bracelets, the designs of which were based on chockers with “Pyramid” studs that the Maison Hermès was already designing, the Collier de Chien. This nuanced evolution appealed to her.

There was something inevitable about this flow: that was plain to see. But to see one must learn to open one’s eyes. And this takes time. Time lost! one might lament. Unless it is the kind of time that revelation extends. We might well be in the midst of a miracle. Of affirmation. This morning the loden coat she wears has stripes that shape a landscape, a horizon. Indeed, all day she has looked out for it: the sun’s point of departure. It is a picture of lines and colors. And, already, more than that.

For her aim this morning is the knowing, sexy smiles of two companions aware that one of them is heading into the light. The rules just got kicked up a notch. She feels powerful today. Her willowy stride follows a path that could never be undone. Not today. Not ever.