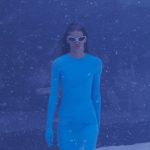 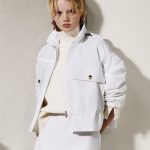 “I really wanted to create a synthesis of powerful, sophisticated femininity, with an interplay of multiple American and Parisian influences, sports and craftsmanship Next to her stands a contemporary man with an instinct for chic nonchalance On the runway, both are grounded by a sense of reality — Matthew M. Williams, Creative Director of Givenchy.

Applying the sensibility of the haute couture atelier to day to day clothing archetypes, this season Givenchy elevates the seemingly ordinary to the extraordinary while making the formal feasible for everyday Silhouettes are equally easeful and monumental, ornamental and practical, layered and direct, displaying Matthew M Williams’ signature nexus of luxury and utility, once again brought to the fore for both men and women.

Sharp, tailored femininity takes pride of place, in a taut silhouette that’s both formal and informal, pure and audacious Nothing is overly precious, even when the materials are worn denim welcomes spectacular sequins and pearls in homage to Hubert de Givenchy’s sense of practical ornamentality Ruffled wool dresses fuse with sport through spectacular coloring and netting that elevate the everyday and bring ease to evening It adapts to a graceful yet grounded amazon, its sweeping drama enhanced by flashes of bare skin.

Taking cues from outerwear and encompassing a practical palette of rich browns, greens, greys and blacks the designer’s color sensibility is unconventionally applied to fluid, tailored silhouettes and transparent, delicately hand embroidered and disheveled ruffled dresses alike Here, Givenchy classicism and radicalism are united in a play on layered volumes and textures The day to day familiarity of washed jersey is explored with a new, intricate, layered rigor where an experiment in graphics and 4 D print embroidery is brought to the fore At the same time, this attitude is contrasted with classical tailoring, structured single and double breasted forms are explored, yet still with ease and lightness in wools and flannels Wide tailored trousers and voluminous overcoats work in contrast While denim is worn, experimented with and treated with equal weight to the duchesse satins that are also found in the collection All is united by silhouette, either long line and sweeping or short and taut yet still with cascading qualities in intricate ruffles, hand smocking and pleats, each emphasizing movement, ease and a place in the real life of the wearer.

Elements from Hubert de Givenchy’s haute couture archive punctuate the collection, modified and brought to the point of today Here, hardware becomes jewelry and pearls become studs The pearl at once encompasses studded utilitarian statements as well as hand beaded garment extravagances, taking in jewelry and bags along the way Other archival reimaginings feature a reworked ocelot print from 1955 over dyed and applied to masculine outerwear in its present incarnation Black thistle embroideries alongside the pearl, the thistle is the motif of the collection and also is featured in prints are actually painstakingly handmade from goose feathers and are also transposed to jewelry and shoes.

Leather accessories give a guiding structure to the collection, whether used in luxurious utilitarian outerwear, trousers or skirts or as a sleek second skin under clothing, such as in the signature Givenchy stretch boots, which, quite literally, elevate the silhouette and the wearer The new bags embrace a softer and more yielding construction, whether this is the New Hobo with the signature Lock or the latest iterations of the Kenny and the softly quilted 4 G bags that also experiment with new proportions On the Kenny bag, extraordinary finishes elevate the everyday in a different way.

Meanwhile, the TK 360 sneaker, with its revolutionary totally knitted form, continues and informs all with its easily worn and evolutionary, growing, changing and wearing sensibility, making the everyday into a radical place This season, the TK 360 takes on more graphic lines, giving it a sportier attitude.

THE EVOLUTION OF LINEN BY LORO PIANA – SS22