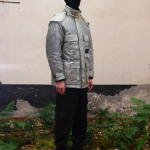 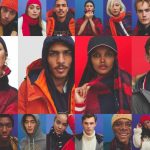 Seven layers of maple wood, or 7-ply, is the core construction of the skateboard deck and the bedrock of this globally popular sport/lifestyle. In a year when skateboarding was destined to debut as an official Olympic sport for the first time in history, 8th Ply is here to put a focus on another layer of this popular activity. Continuing their successful collaboration Sasha Bogojev and Mark Chalmers team up again for 8th Ply. Curated by Sasha Bogojev and presented by e Garage Amsterdam, 8th Ply is a group exhibition featuring artists whose lives were, and are, signi cantly marked by their connection with skateboarding.

Working in a variety of mediums, applying different techniques, and using a diverse range of aesthetics to express their creativity, the presentation aims to provide a glimpse at the uniqueness, imagination, and resourcefulness of the people closely connected to skateboarding. And while skateboarding itself is now a big part of popular culture and is getting heavily branded as a mainstream sport, 8th Ply serves as a metaphor for the cardinal ingredient that turns a wooden plank into a form of identi cation.

“From my perspective, 8th Ply represents the channeling of human energy and emotion into the artifact of the skateboard. e combination of board and rider together allows each to become greater than the sum of their parts. My work across the globe bears witness to the inspiring magic that occurs when skateboarders—particularly among SOC—are allowed to move beyond the local and contribute their viewpoints, actions, and activism to the global language of skateboarding culture. Each rider carries a di erent thread of humanity which, when woven into the broader fabric of skateboarding, emboldens the next generation to see skateboarding as an outlet for their voice.

As a young Black teenager, I witnessed rsthand how overt and covert racism negatively a ected the lives of people of color, and I sought ways to disrupt its e ects. Once discovering skateboarding, I found a new space of freedom and self-ex- pression, as part of a multi-gendered, multiracial collective dedicated to pushing through life’s challenges atop 7-Plys of Hardrock-maple. e diversity within our coalition o ered a blueprint, which demonstrated that when harnessed correct- ly, skateboarding culture might o er the possibility to challenge power, build community, and create social change.” – Dr. Ne alie Williams, Artist. Scholar. Diplomat. Activist. Skateboarder.

Garage Amsterdam was created in 2004 by Mark Chalmers, a creative director and founder of the interna- tionally lauded Creative Social. Mark also runs the international studio Chalming.Co where he is working with artists and art to build global brands through culture. Brands such as Nike, Dior, Google and Patagonia. Fascinated by the power of grassroots networks, Chalmers started e Garage Amsterdam, as a place where artists could stay while in Amsterdam, create and exhibit work and connect with other artists. Since 1631 and now a UNESCO World Heritage site the space has born witness from Calvanism through Rem- brandt, and as a former brewery, restation, church and squat, continues its cultural theme embracing artists working with museums, causes and contemporary shows.

Adam Neate – British artist whose works on recycled cardboard le in the street for anyone to collect made a big push towards transferring street art into galleries. rough his studio practice has been exploring with Dimensional Painting in which he mixes unordinary mediums and techniques to elevate his gure-based works above the at surface. e artist has been actively skateboarding for decades and had an exhibition comprising of 100 hand- illustrated skateboard decks with Clown Skateboards in the UK.

Andrew Schoultz – LA-based artist equally popular for his large-scale intricate murals, and his densely layered pain- tings that are transforming the illustrative elements into a visual language of its own. Created as an intuitive response to various social, political, and economical issues, the works’ visual chaoticness follows their thematic complexity. Over the years his love for skateboarding and art has been intertwining through the di erent projects including painting the In nity Plaza skate park in Miami, the Community Skatepark in Las Vegas, or the infamous Tampa skatepark.

Boris Tellegen – Dutch visual artist who started his artistic career in the 1980s under pseudonym DELTA, treating
his tag/name as a sculpture and being one of the pioneers of dimensional gra ti. rough his practice, he is regularly mixing the in uences of his education in industrial design with a constructivist approach, while working with every- thing from architecture, painting, sculpture, and installation. Over the years he collaborated or worked on many skate- boarding-related projects, including designing a Supreme logo or working on a line of apparel with Pop Trading Co.

Ed Templeton – American professional skateboarder, contemporary artist, and photographer., founder of the iconic skateboard company, Toy Machine, based in Huntington Beach, California. roughout his life, he’s been intertwining his passion for street photography, drawing, and painting, regularly exhibiting these works together as well as using them as key elements in the visual identity of his skateboard company. With a focus on suburban America, youth culture, and the neglected, Toy Machine made a critical change opening the skateboarding world towards diversity and inclusion.

James Jarvis – British illustrator and toy designer whose illustrations transcended the boundaries of the visual art form, elevating him to a visual philosopher title. rough his expressive, intuitive, quirky simplistic illustrations, Jarvis is observing the world, o en using his skateboarding sensibility to tackle everything from most mundane, to existential issues. Over the years he worked on countless skateboard-related projects, including collaborating with companies such as Krooked, Nike SB, etc.

Jean Jullien – French graphic designer and illustrator, who in recent years re-focused his creative practice from making witty commentary on everyday life towards painting a visual diary of his life. Portraying everything from family mo- ments, rural France, beachside life, to sur ng, the work has been exhibited in galleries and museums around the world. In 2016 he designed a line of skateboards for Almost Skateboards and has collaborated with e Skateroom on a special project.

Jeffrey Cheung – Bay Area artist whose playful and intimate visuals have been showcased widely around the globe and led him to launching Unity, a printing press and skateboard company that supports queer, trans, and people of color (QTPOC). While painting and illustration have been arguably his recognized route for self-expression, he is active in the world of skateboarding and music, always putting the focus on keeping the doors open for people who have been unable to express their honest selves.

Josh Jefferson – Visual artist actively producing work since the late 1990s with a focus on material experimentation and visual simplicity. Born and raised in Santa Cruz, California, the artist grew up surrounded by skateboarding and sur ng culture which strongly informed his aesthetics and approach to creative expression. Boun- cing between playing Free Jazz and Free Improv and painting, his ongoing studio practice is focused on abstracted conceptualizing of the human face.

Parra – Dutch visual artist from Amsterdam who’s been working with design, drawing, painting, animation, and sculp- ture, and has been showing his work at galleries worldwide as well as collaborating with countless major brands. A few years back he launched the unique Tired Skateboards brand, focused on the veterans among skateboarders, and has recently collaborated with Nike on designing the national uniforms for Olympic Games for skateboarding teams from the USA, France, and Brazil.