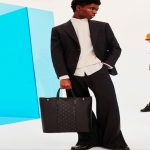 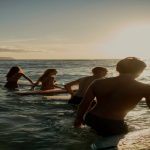 On Saturday evening, March 7, Felice Noordhoff opened the G-Star RAW guerrilla show, which literally took travelers and guests through 30 years of denim innovation in the Metro from North to South. The show – a collaboration between G-Star, Amsterdam Fashion Week and the GVB – turned out to be a surprising combination of three Amsterdam brands.

Influencers, press and friends of the brand gathered at Metro Station North of the North / South Line. The surprise was great when everyone was asked to board the metro, together with unsuspecting travelers in possession of a valid GVB ticket. During the ride from North to South, models displayed a combination of G-Star RAW icons, such as the 5620 G-Star Elwood, artwork from shows from New York Fashion Week and new Hardcore Denim styles, among others – without interrupting normal service. The unprecedented manifesto of G-Star was evident during the show: dedicated to denim's fabric, craft, culture and history.

Gwenda van Vliet, CMO of G-Star RAW: 'We have been innovating in the field of denim for 30 years. We wanted to show this in a unique way. A guerrilla show in a subway tunnel – that's G-Star RAW. '