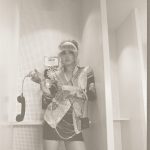 “This season, I wanted to step away from Rome, or at least I wanted to place Rome in a global context,” says Kim Jones, Artistic Director of Couture and Womenswear. “In this collection, we are looking at fragments of different cities, namely Kyoto, Paris and Rome. The fragmentary nature of things is echoed throughout the collection, like snatches of memory or the impression of things past, present and future.”

This season, Jones and the craftspeople of the FENDI ateliers approach the couture collection as a palimpsest, where iterations, transparencies and fragments of the past go to make up the present and move subtly into the future.

Couture traditions are made both human and approachable, light with a sense of luminosity, lucidity and ease for the wearer. Gone are the grand edifices, instead replaced by a softer, more yielding feeling of simplicity and agency for the woman in the clothing.

Kyoto, the cultural capital of Japan, is the starting point. Here, fragments of kimono fabric from the eighteenth century were found, becoming a foundation for the future as both recreations and reinterpretations in the collection. Kata Yuzen, a painstaking hand printing and painting technique unchanged for many hundreds of years, is once again utilised for these fabrications. Made in Kyoto as traditional silk panels, here they are sliced and asymmetrically reformed in floor-length dress silhouettes. The cascading Acer palmatum leaves from the fabric design – named Ode to Autumn in the 1700s – find various forms throughout, particularly in the proliferation of delicate embroideries that reach a crescendo in the final tulle gowns of the collection.

Parallels are drawn between East and West, masculine and feminine, the natural and the man-made, tradition and the modern, right through Autumn-Winter. The Kata Yuzen dresses are echoed and find their continental counterpart in the sinuous, glittering crystal cages that more reflect the architectonic spirit of Paris in their construction and fabrication, yet still ultimately frame and yield to the body.

A sense of French ‘Japonisme’ and art deco ornament in the flou, is joined by a more Italian take on the tailleur in the Vicuna, leather and fur work. Nods to masculine codes of tailoring are found in Vicuna fabric suiting and cognac calf leather pieces, with their structures, emphasised internally and at times externally. There are also personal pleasures, just for the wearer in the construction of many of the items – internally, traditional Japanese fabrics are used as linings and quiltings in suiting as well as in underpinnings in dresses. The supreme skills of the FENDI fur atelier are on display in the intarsia construction of the shaved mink suiting. Here, an abstract reinterpretation of another traditional Japanese fabric fragment from the eighteenth century is realised – named Rope Mountain, it both grounds and monumentalises the collection.

DIOR REOPENS ITS BOUTIQUE IN THE HEART OF AMSTERDAM