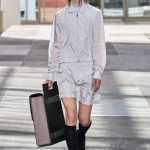 The classic structure of sartorialism, infused with a sense of loucheness and sensuality. A rumination between the need for protection, and the intimacy of up-close tactility.

Dries Van Noten menswear spring/summer 2023 starts with the friction between these two forces; the refined, precious and intimate vs hard, robust outer layers that protect us from the world. Softness and solidity.

The collection curates different archetypes of man; after-dark dandy, cowboy, garage scene grifter, sleepy daydreamer. Their mannerisms and codes are manipulated to form new interpretations of each stereotype. Dries Van Noten spring/summer 2023 touches on the Zazou subculture of Paris during World War II; the youth in their considered finery dancing their troubles away to swing jazz at the Pam Pam Cafe.

The sense of the intimate carries through into flesh tones and a new emphasis on lingerie for men; silk vests with spaghetti straps, worn with classic pleated trousers. Silk smoking shirts with unstructured striped pyjama pants, loose and syrupy in their form.

This is contrasted with the dynamism of Motocross; an underground GlamGarage movement for the roar of 21st-century life. Biker-inspired trousers with cut-out panelling, alongside a playful new ‘DVN’ motif emblazoned on sleeves and a honeycomb grid motif on coats and shirts. Sequined embroidery on cycling shorts; a glorious preciousness alongside technicality. Lettering is significant and powerful. No obvious signage, but discreet messages woven subliminally into the story. The letters of Dries Van Noten are fragmented into fabric, a disruption of branding. In a world of digital white noise, the Lorem Ipsum text – broken Latin wording used by graphic designers as a placeholder – is employed across trousers and patches of fabric. An archaic language left open to interpretation, given purpose.

The masculine tendencies of the cowboy feature in the Western-style shirting, boots and shoes. Suit shapes are rigorous. A new silhouette of blazer evolves; cropped, zipped and tight on the body. An exacting jacket with exacting square shoulders worn with flowing trousers in an excess of fabric; preciseness in the former, abandon in the latter.

Balanced with suiting are expressions of couture; the voluminous plume on a rolled shoulder, the dramatic silhouette on a parka, cape sleeves. Patchwork is employed in myriad forms, roughly cut up and spliced together.

The enjoyment of all things tactile, of sensory experience; the glint of sequin as it hits the light, the ripple of movement in airy trousers. In Dries Van Noten’s first physical men’s show since January 2020, it feels right to celebrate those life-affirming moments.

PIAGET’S LONGEST NIGHT, the release of their newest collection