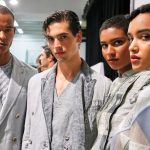 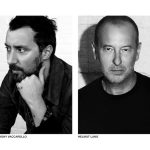 Bold, optimistic, colourful, light, pure, fun, sculpted, easy, kinetic, frank, joyous, vivid, warm and stark, jubilant, powerful. A minimum od artifice. The visionary films of New Zealand artist Len Lye. He pioneered harnessing motion in art. Filmed in the 1920s–1940s, with colour painted and motives scratched on the celluloid, they were precursors of the psychedelia that would follow only forty years later. A fashion shoot by Viviane Sassen. An homage to the powerful role fashion editorial and imagery has played in fashion. The uplifting joy of a perfect moment. A bright windy, sunny day on the beach. Billowing pure white clouds race across a clear blue sky. Energy is high. The narrative of folklore is evoked with traditional embroidery techniques. A point of view shared for our collections for Women and Men.

FORM: The challenge was to capture movement and optimism in dress. Pure lines that span many attitudes of dress from the sublimation of couture to utility in workwear. From constructed balloon sleeves to a simple patch pocket chino. Many looks for women and men have shorts as a foundation. The lines between traditions of garment structure for men and women are blurred. High waisted skirts and pants. Exaggerated wide scooped necklines on constructed garments are mirrored in shirting. Vivid one-piece bathing suits for women for the first-ever time. Light caftans for the beach. Ties draw scalloped forms on backs.

PRINT & EMBELLISHMENT: All printed motifs are derived from frames captured from the films of Len Lye. A new take on print and embroidery. A graphic play with light and shadow. The reality and illusion of dancing in a projection. Motifs from one printed garment invade another – prints from a skirt move onto the lapel of a jacket. What appear as simple stripes are shards of light cast through a louver shutter captured and printed. Stripes undulating across garments almost bring optical interference. The word ‘You’ is printed orembroidered on tops to encourage an end to the era of ‘Me’. The largecircle of a spotlight in vivid colours seems projected on the wearer. The romance of verdant green palm trees. The traditional craft of needlework in optic white. Laser cuts in leather seem as ‘Broderie Anglaise’ or lace. The exuberance of ruffles. Len Lye’s essay on movement in art is printed in its entirety on garments that will ‘drop’ later in the season.

ACCESSORIES:  Clutches seem caught in a vivid projection of colour and stripes. Shoes and open-toe sandals in Nappa leather mounted on our signature banana heel. Eyewear is colour coordinated with earrings and necklaces in micro beads.