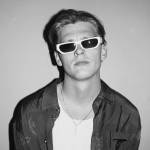 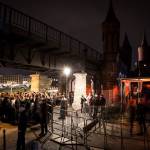 A journey of jazz: a dialogue between New York and Paris, via New Orleans – its birthplace – is found in the dior tears collection-capsule guest designed by denim tears’ founder and creator Tremaine emory. There is a meeting of the elegant and the idiosyncratic, the casual and the classical. The models have denim as their basis with special jacquards and discharge prints developed and added to heritage fabrications, with fifties shapes retained. A sensibility is augmented, with the skills of the Dior atelier infusing all. Here, American homespun meets French high craft. The line is inspired by the look of black ivy league students of the fifties and sixties and the style of jazz musicians from the same period. Here, preppy meets the origins of ‘cool’ via the world of work in archetypal American garments, such as unpretentious plaid shirts, enduring varsity jackets and effortless chinos combined with the refinement of wool overcoats, sinuous tailored suiting and elegant cognac leather accessories, such as the trumpet bag. The silhouettes are presented in ‘tableau vivant’ form, surrounded by the antiquities of one of the greatest civilisations of all in Cairo’s grand Egyptian museum.

IN CONVERSATION WITH VINCENT CATANI