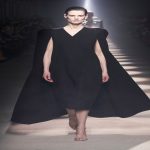 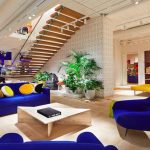 Arrows fly at first for a fast, efficient appeal in which Bergamot bites, Pink Peppercorn invigorates with spice and Elemi imprints its lemony incense accents. It is an opening move that demands attention, heightening its charms and revealing the ensemble. An introduction that acts as a foil to a sensual, profound and surprising sequel.

Instantly dominating, the Woods appear, speaking out loud, simple and modern in equal measure. Solid and imposing, they are like a signal of virility, an obvious and readable presence.But the story isn’t that simple, as they also have fun with their sensual, intriguing side …

The Woods are a solid presence, in extreme doses. They are also versatile, weaving a new web, expressing renewed male sensuality, far from the usual gourmands and oriental exercises in style. We are witnessing a veritable polyphonic symphony of woods, rich with tension and dialogues; Atlas Cedar, the absolute star of men’s compositions, exhales its dry, subtle leathery warmth. Iconic Haitian Vetiver is somewhat rough and brusquely charming in the woody power of its earthy accents. The ensemble forms a virile manifesto that mixes with the sensual caress of a very light Patchouli Heart, which plays the role of go-between. Twice distilled, it is modern and clean, rid of its humid notes. Like a friend bringing everyone together, it is rich and round, and is accompanied by the strong presence of Musk notes that are enveloping, softening and reassuring.

And yet, a sensation of inexplicable freshness, of something “delectably clean,” remains to the end. There is a tenacious feeling of washed wood, which is entirely contained in a single, almost magical note: Iso E. A light, subtle sensation of enveloping comfort. Instilled in the composition, it lasts endlessly, stretching out the sensuality of a clear wood scent. Like a conclusion that makes a point, but is never heavy-handed. A sensual limpidity keeps all the promises of a new, intensely woody masculinity, which makes a long-lasting impression. A man, yes, but a highly nuanced one.

“The signature of this composition is an overdose of sensual woods. The scent of this new Dior Homme gets straight to the point; it claims a frank, solid simplicity. It is luminous and appealing, but also conceals an enveloping softness.”

The Dior Homme monolith is also an icon. Today, it features a streamlined design that retains the beauty of its virile block of glass. Its pure stopper has been simplified. The black cube that it closes is moulded in translucent Surlyn. Its graphic limpidity is the result of technical prowess. This lighter bottle sees its glass weight reduced for an easier hold and also gains polished, softer angles. It’s an object worth seizing for the sensation of holding its fine amber-coloured juice firmly in your hands. More sensual but just as stylish, the new Dior Homme bottle has undergone a rigorous and modern evolution.

Although Dior Homme has been reinvented today with a brand-new scent, its very first version, which launched in 2005 and gave pride of place to a sophisticated Iris, is not going anywhere. Now named “Dior Homme Original,” it remains available in boutiques in both France and Belgium, and,of course, worldwide at Dior.com.