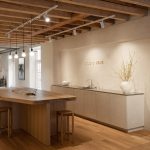 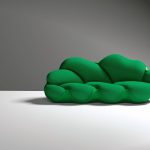 For this first edition, De Renava has chosen to draw inspiration from the motif of the wave, as a metaphor of constant movements which redefine collective identities and visions. The Rouge Odyssée exhibition questions the function of “home” as a liminal space in perpetual mutation, base of hopes and  tensions. From the Mediterranean Sea where waves of thoughts, goods and people have constantly determined History, the show explores the themes of exile, memory and transmission,  inviting us to observe human trajectories.

The title refers to the Homeric epic, in which the first mythical exile of the Mediterranean past, Ulysses, makes a stopover in Bonifacio (Chant X). In this poem, the sea always sports a purple-red colour, but never blue. This red is a symbolic vision that depicts the sea not only like a  physical landscape, source of desire and peril, but also as  a metaphysical space where the waves of thoughts merge and the mechanisms of identity construction crystallize. Adopting this theoretical framework, Rouge Odyssée evokes the experience of home as a place of intersubjective  encounters, a territory to claim and an identity to rebuild in a globalized and post-colonial setting. Going through the mythological evocation of the home, then through its urban embodiment, the exhibition presents a network of pieces that offer multiple poetic insights into the collective legacy and universality of human vulnerability: this shared awareness of facing the same struggles, weaknesses and determinisms in a hybrid world where everything mixes up to be built up.

It is at the southern tip of Corsica, in the heart of one of the most beautiful nature and its historical monuments, that De Renava celebrates the best of international contemporary art. By establishing a dialogue between art, architecture and nature, the biennale offers a journey of discovery and contemplation, showing alternative visions of Corsica, the Mediterranean and the world of tomorrow.

De Renava is a non-profit organization, recognized as being of public interest and committed to protecting the urban, historical and environmental  heritage. From the Genoese citadel of Bonifacio to the land of the lords of Alta Rocca region, De Renava evolves in exceptional backgrounds in a spirit of preservation and enhancement.

The urban walk – or official exhibition – dedicated to the field of video art and experiments related to new technologies, takes place in the emblematic city of Bonifacio. Nestled in historical monuments and specially designed lodges  by OrmaArchitettura, works by internationally renowned artists are exhibited for a period of 6 months, allowing the public to renew their view of the city’s heritage.

The wild trail, like a confidential garden, invites visitors in the footsteps of scattered pavilions in the Corsican mountains. Between sculpture and architecture, these pavilions constitute artworks permanently installed in the middle of nature, left to the discovery of the wanderer. It will be open from the end of 2022.

With a reduced number of participants – about fifteen artists per edition for the official exhibition and two pavilions per year – as well as small groups’ visits, De Renava distinguishes itself  from monumental biennales by offering a fresh experience to the  public. The project is led by a research team and experts in art,  architecture and engineering, all from the extreme south of the  island and childhood friends. The team is moved by the desire  to activate the island heritage and to invest in creation and  valorisation of local identities by developing a virtuous project  that opens up dialogue and cultural exchange within the Mediterranean at first, and internationally thereafter.

Faithful to its Mediterranean DNA, each edition of the biennale draws its subject from the thematic reservoir and iconography of the «Mare Nostrum» and notably from its ancient legacy: starting point for a universal debate, which will be carried by the multiplicity of guest artists. In addition to the official exhibition, the Capsule room, located in the Montlaur military barracks, is entirely  devoted to the Corsican artistic scene. Fiveworks will be successively exhibited there, thus opening  new interpretations of the chosen themes.

Interview with OKKE & XANDER, owners of STUDIO HENK. Interior design made for design lovers today and in the future