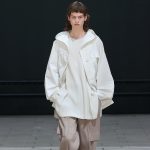 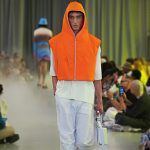 Craig Green’s men have identified a distant new summit to ascend, obscured far from view, but somehow ever present.

Reflecting an uncharted and constantly adapting trajectory, their appearance shifts away from linear conventions, mining all that they know of themselves in order to move forwards.

Committing to their invisible horizon, the baggage and decorations of many decades are individually re-examined and modified along their climb, from the soft glow of adolescent reminiscences, to the stark moulds of adulthood.

Here, the essence of many ideals is extracted to form new prototypes that will benefit their course, whilst many others are shed but left hanging as symbolic reminders.

Central to this process, a closely guarded set of tools are forged that remain sheathed but sat in plain sight, as unexplained instruments designed to assert asilent new strength.