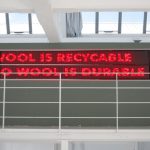 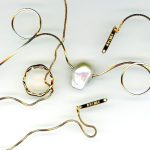 In conversation with Wannes Akop

We had a pleasure speaking to Wannes Akop (24), womenswear designer from Dutch-Armenian heritage, who just showed his first collection last month at Amsterdam Fashion Week.

Wannes! Two years ago you were on our first cover, with Daphne Groeneveld wearing that gorgeous jacket. That was your graduation collection. What was your reaction?

I screamed, quite literally! It was a huge surprise that my garments were on the cover, I didn’t expect it at all. Ferdi Sibbel, who styled the shoot, and who I also worked with for my graduation project, requested some of the pieces of the collection. I brought them to Paris myself, because of time constraints. Months later, I suddenly get a message telling me that this specific shot was chosen as the cover. It was something I didn’t expect at all: already dressing Daphne Groeneveld for this editorial was a dream come true and made me really happy. So yes, I screamed!

Only two years later, and you just did your first official show at Amsterdam Fashion Week. How do you feel?

I feel very excited! It’s a scary moment also in a way when you do a show. As a designer you present a collection that is a piece of you and you never know how it will be received. Luckily, It’s been a very interesting process so far and I’ve received great responses, so that’s very exciting. Of course when you graduate you also do a graduation show, but it’s never your own show. I feel so honoured that I was able to fully have my own vision, translated into a presentation, and to be able to present that to the world during Amsterdam Fashion Week.

And I also have to thank the people that have made this possible. One of my best friends, Robin Burggraaf, brand director atNinamounah, who actually introduced me to Danie Bles for the first time, and Danie herself for believing in me and giving me this opportunity.

When did you know that you wanted to pursue a career in fashion?

I feel like this is the question where every creative would answer saying that they knew already from a very young age, but it actually wasn't the case with me. I was thinking of many other careers I wanted to pursue. From archeologist to being a chef. But they were mainly career paths that involved working with your hands. I always loved drawing, painting and being artistic. I remember I used to draw my sisters and basically redesign what they would wear, from this moment on I realized that a career as a designer in fashion was something I definitely wanted to pursue. That’s when I became focused on becoming a designer, and a few years later registered for a fashion education.

For people that are new to your work, how would you describe yourself as a designer?

My work explores the space between my Dutch and Armenian heritage. I try to create a dialogue between these two worlds by taking influences of both to create a story. Largely influenced from the tailoring background of my parents and my family, my designs thus come from a very personal point of view, I feel that it's always a good place to start from because as a designer you want to create something that is close to you.

Growing up with tailors as parents, I have always been taught to appreciate clothes and fabrics. Garments should be well constructed and made of high-quality fabrics I believe, so one can create a piece that lasts longer than one season and doesn’t end up unworn or thrashed like many fast fashion garments.

Could you tell us more about your process?

That wasn't easy at all at first. I was actually working almost full time until 1,5 month before the deadline of the collection. That made the process difficult in the sense that I couldn't spend all of my energy and time on the collection in the first few months of the process.

As I am born and raised in Europe, I never really considered my Armenian heritage when I was growing up, Because when you’re from different ethnic backgrounds or growing up in different countries, you deny elements of your heritage in order to assimilate into another culture. I would end up confused sometimes, and I never really engaged or tapped into the Armenian side of me. It wasn't until I started studying fashion that I started to wonder who I am, and what truly triggers me. I started traveling there more often, looking for what inspires me and that pushed me to create a representation of myself.

The actual process of my collections itself always start out with conversations with my family. They are the core of my inspiration and play a large role in my work. For my Spring – Summer 2022 ‘Nour’ collection, my starting point was a family holiday photo taken by the Black Sea, right before they moved to Europe. Core memories on this summer holiday were of my grandmother’s fringed Posad Pavlova scarf, juxtaposed against the luscious summer fruits such as the pomegranate: the national fruit of Armenia, which inspired the organic lines and sharp shapes. A fusion of my Dutch upbringing and Armenian heritage, my work pays homage to the 90s, the period in which my parents moved to the Netherlands and my sisters began ‘Westernizing’ their sense of style.

What are your plans for the future?

To see Wannes Akop all over the world! We’re currently in touch with online retailers about selling Wannes Akop as a brand.

Besides, I just received pictures yesterday of Imaan Hamman wearing my clothes, and it was a moment that made me realise that this is actually what I am working for. To be able to see people wear your garments is such meaningful moment. Of course there are a few people that I would love to dress: as a designer you always have certain dreams of people to wear your clothes. Cher is big inspiration for me, and she is Armenian too, so she is someone I would love to dress! But also collaborating with Maison Francis Kurkdjian on a scent, who is Armenian too, would be a dream come true. In the end it really is about building this community and relations with people that not only believe in you and want to support you, but also you as a designer believe in.

You collaborated closely with MAC Cosmetics on this show. What was important for you while creating “the look”?

It was really nice to work with MAC, and Hannah and David who are two amazing talents in this industry, on beauty for this collection. I always find eyes of people very intriguing as to me the eyes are the most beautiful part of the face, because they really say something about someone. So we tried to highlight them, but in a very natural and light way. Furthermore, we spoke about the inspiration of the collection, and since that was “A Hot Summer by the Black Sea”, I wanted this fresh feeling. That’s why we used a lot of glossy elements to make the look quite dewy, as if they just came out of the Black Sea, and changed straight into their look, which is an extension of what they were wearing during the day.

The new collection was described by some media as ‘leaving nothing to the imagination’. What is your view on that?

In my opinion it shows that in a way, we as people have become a lot more prude. I think there’s a whole imagination beyond nudity, for me it’s not that special. I think it’s something very natural also. If you are someone who is comfortable showing their body and wearing something that shows a lot of skin, I totally encourage that. Also looking at how we react on social media: where posts are immediately removed when the female body is shown, it just shows it’s not very standardized. I hope that in the future it will be a bit more normalized, and that we will not necessarily look at our bodies in a sexualized way.