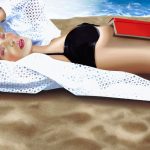 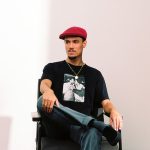 Music On the Playlist Portrait

In conversation with Cero Ismael

Amsterdam based, Dutch, Surinamese and Indonesian, Cero Ismael grew up in a melting pot of different cultures but unfortunately in a broken home. He found early comfort in love, religion, spirituality and music which quickly became his life and focus from an early age – first starting to make music at 11 years old.

On 18th Feb 2021 he released his 8-track debut project Blue Man. The main topic is feeling broken hearted and the mourning process that comes with it, every piece of music discusses the disconnection, the isolation, the missing and mourning that comes with heartbreak.

We had a delight speaking to him about his new project.

You just released your debut EP Blue Man. Who is Cero Ismael? And who is the ‘Blue Man’?

Can you tell us a little bit more about the project and your process? How did you go about writing each track?

I started with Blue Man in the beginning of 2018. The whole project is produced by Jopie & Rijnbaart. We started working together in 2017 but the year after that we really focused on a project. All of those songs were made in the same (heartbroken) headspace and pretty short after each other. The first song I made was ‘Discontent’. I wasn’t feeling the first demo that much though, so I let it rest for a while. It took me a year to revisit it and change the whole song. A couple of weeks after ‘Discontent’, I made ‘Insane’ and that really was the kick off for the project. After Insane, all songs came together pretty fast after each other. Some songs I would have my focus on and finish, some songs I would rest for a moment in the demos folder and focus on after some time. The last song I finished was ‘Tell Me How/Birds’. We added the last parts in November. Huy came in with the best bass slides ever.

You are based in Amsterdam now, but what was it like growing up in Almere?

Growing up in Almere was beautiful, peaceful and chaotic. Everything started for me in Almere. I met most of my friends there and with those same friends I started making music.

On Blue Man you sing a lot about heartbreak and the breakdown of relationships – what would be your one piece of advice to anyone going through a similar situation?

There’s light at the end of the tunnel. Always. However hard it may seem being in an unpleasant situation, it will get better. Asking and listening to advice from surroundings can and is very helpful most of the time, but listen to your own gut feeling.

There is a mature and peaceful quality to your work. How do you find peace amongst the chaos?

Writing, reading, creating and working out. But to find peace within, chaos is needed sometimes. At least for me. Healthy chaos. Can’t control everything, there needs to be a balance.

Tell us a bit about a day in the life of Cero Ismael.

It depends what day it is. But at the moment all of my weeks have been feeling and looking the same. What day is it? I meditate, write, workout, read, studio, spend time with friends, family or myself, studio again or cycle.

How important is fashion and visual expression to you?

Very important. Fashion and visual expression both express something that words can’t. It doesn’t have to make sense. Feelings don’t always make sense. That is what I love about art so much. It doesn’t have to make sense as long as you feel something. Or nothing. When it comes to fashion I like minimalistic, monotone and clean looks. Preferably no logos. I like the Amsterdam based clothing brand 'Unrecorded' a lot at the moment. Very clean and GOTS certified organic cotton. It is important to me that brands and human beings think and care about the world.

One of my latest favourite examples of visual expression is Arthur Jafa’s ‘Apex’ video. The 8 minute long video shows more than 800 emotional resonating images in the form of a quick digital slide show. I don’t want to reveal too much about it, maybe that'll ruin it for others. But that is another form of visual expression that I love. Give people the space to fill it in themselves.

Who is someone on your playlist that we wouldn’t expect?

I like to listen to Mr. Vegas a lot.

What has been your career highlight to date?

Releasing my debut project Blue Man is a real milestone and highlight to me. I’ve worked on those songs for such a long time and all of them are special to me. Finally sharing those eight songs with the world is unreal. I’m so thankful.

What else can we expect to come this year?

I’m busy with finishing the second project at the moment. You’ll hear that somewhere this year.

Check it out here: http://smarturl.it/BlueMan

“Calm during a storm”. In conversation with Toto Blaauw