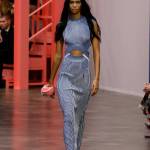 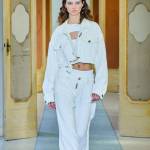 One step ahead. A couple’s game that turns into a kaleidoscopic representation of contemporary society, a mirror of its modern identity, circular movements and emotional flows. This is the theme of Coccinelle’s new FW 22-23 advertising campaign, an evolution of the previous one which is once more entrusted to Giampaolo Sgura’s artistic direction and to Anna Dello Russo’s expert styling.

A black and white prism of a post-realistic nature which makes the story more real than it really is. Engaging and powerful.

A focus on the genuineness of an emotional relationship through gestures reminiscent of the tale.

The project’s common thread is that of a love story in modern society.

Here are the punk lover, studs, tattoos, fishnets and rebellions.

To urban skaters, two hearts and a uniform, hooded sweatshirts and oversized jeans.

And there are the clandestine lovers; a girl holding a man’s face in her hands, concealed by the shadows of the rocks and the distant murmurs of the sea.

Then, the toned and well-defined muscles of a gymnast tense in the fatigue of training, standing next to him a girl with long hair and no make-up who brushes her lips against his. All seems natural and simple.

There also is the no gender love, where indistinctness reigns: the same minimal leather jackets, the same sunglasses, the same hairstyles.

And there’s always a Coccinelle bag – three selected models, the must-have Coccinelle Beat, the curvy Coccinelle Magie and this season’s new icon, the Coccinelle Nico, with the exaggerated plectrum closure: not a simple accessory, but an essential element of this beautiful and rediscovered physicality.

Bags representative of hugs that explode into passionate kisses or foreshadow moments of infinite tenderness.

Each gesture goes beyond intimacy and sets the rhythm of an endless and gladly rediscovered sociality. #WeAreOne is the hashtag of this cinematographic campaign which focuses on Coccinelle’s community.

An absolutely genuine reflection of today’s life without filters.

Such results are ensured by the street casting, or method used by Giampaolo Sgura and Anna Dello Russo to find new faces, bodies and stories. Reality and genuineness, here and now.

During the Milan Fashion week for two weeks, from September 17 to 30, the campaign will be starring in a take over in the Duomo metro with a photo gallery with 56 images.

A scream to shout out we are one yet strong, powerful and unstoppable community. The only way to ensure “we” become “one,” a message of love that sets no limits.

This is the only way to reach our goal: the freedom to be ourselves.