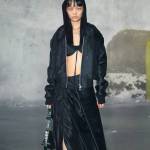 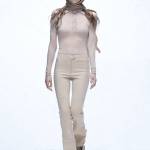 On the first day, the label SIA ARNIKA delighted us with a collection of nordic mysticism and old folk tales merged with hardcore futurism. Themes that have been explored since the brand’s inception – researching draperies with a renaissance approach to textiles – are given the sci-fi treatment with the support of Circulose®: using a new narrative of sustainability to investigate current cultural developments alongside traditional stories. An exploration of two opposing forces which exist within the same universe, it’s a place for expressing both minimalism and maximalism.

Danish designer SIA ARNIKA is fascinated with unlikely textiles and silhouettes. Fascinated by “finding the sublime in the quirky and weird,” she established her eponymous Berlin-based label to explore the dynamics between minimalism and maximalism. Deconstructed features and bold, unique shapes make SIA ARNIKA’s dresses, knits, outerwear, tops, and trousers instantly recognizable. Her collections encourage harmony among opposites: showcasing hybrid structures, an array of textures that contrast sleek forms, and vibrant colors paired against stark black.

Once again SF1OG has surprised us with “Artifact” processing the history of different people who met the designer in the form of artefacts. The entire ready-to-wear collection is kept in dark brown tones, alluding to the slightly yellowed color of old photographs. For the designer, the color palette conveys that somewhat dreary yet vibrant feel. There are also old textiles, such as linen from 1910 or wool from Rosa Marga Dahl’s grandmother. Cut details imitate the shapes of vintage pocket squares or the designer transforms the button placket of a jacket, which she discovered in an old photo, onto trousers. The postmark of a postcard from 1800 can also be found in one of her looks in the form of a lasered leather patch. Classic silhouettes are skilfully complemented by small details, such as asymmetric hems, giving them a whole new character. The label uses layering to play with the contrast of body closeness and distance.

With SF1OG’s genderless, extraordinary and partly experimental design, the Berlin fashion label exists in the spirit of time and is especially based on inspirations from the past. Sustainability has been an important part of the SF1OG brand DNA since it was founded. With each collection, designer Rosa Marga Dahl strives to create particularly responsible looks. By using mainly recycled or upcycled materials, the brand sets an example for a circular fashion system.

Lilia Litkovska was born with the art of tailoring: the Ukrainian-born designer is now in the fourth generation to design fashion and founded her eponymous label in 2009. She sees it as her mission to preserve the profession and craft that has surrounded her since childhood. In her looks, she combines tradition with zeitgeist: all designs are subtly sensual, the silhouettes are sometimes bold and sometimes flowing, but each design is always broken up and complemented by sophisticated tailoring and craftsmanship.

The title of her and at the same time the source of inspiration for Lilia Litkovska this season was the “Vesniankas”. Traditional songs from their Ukrainian homeland that are played at the beginning of spring. Metaphorically, spring stands for a new beginning for them and for Ukraine itself: a young nation that is fighting for its freedom and, cruel as the situation is, has the opportunity to reinvent itself. The country is growing up and is facing a fundamental change, which the designer documents with a hopeful collection.

Lilia Litkovska wants to make a bold statement with her ready-to-wear. Several looks, in the form of elaborate embroidery, adorn a poem called “A Prayer of a Ukrainian Patriot”, which a political dissident first wrote in his blood on the walls of his cell in the 1930s. Charmingly chaotic silhouettes embody youthful energy and modest, intimate nature of Ukrainians. Fringed dresses that appear weightless meet crocheted accessories and contrast with tailored, masculine suits. All looks are refined, artful and extremely chic. As in her previous collection, the designer manages the balancing act between sophisticated tailoring and everyday comfort, always with a nod to traditional Ukrainian costume.

The neutral color palette ranges from innocent pure linen to strict and powerful black. In a subtle way, Lilia Litkovska wants to emphasize the variety of opportunities that young people and her country now have. Since the beginning of the invasion, Lilia Litkovska has been active in her country by raising awareness of the struggles of the war, creating charitable projects and supporting the work of Ukrainian designers.

In the “Queen Palace”, a wedding hall in Berlin Kreuzberg, Lou de Bètoly presented her collection between kitschy decorated tables on which silver XXL vases filled with white plastic roses were enthroned, Lou de Bètoly‘s fashion looked surreal and her runway show was more like a performance. Ever since founding her label, the French-born designer has been fusing fashion and art, creating not only a wider range but also depth of artistic expression.

This season, Lou de Bètoly found inspiration in the folk tale “The Emperor’s New Clothes”. With her designs, she questions the value of expensive fashion, luxury, decadence and excess. She confronts common and ever-changing beauty standards of the “rich and famous” and translates this on the one hand into “second-skin” designs and on the other into looks that live through maximum volume. While her rather dark colour palette is punctuated by snow- white, soft pink and strong red, she juxtaposes elaborate embroideries and weavings, materials made from waste.

The designer duo themselves call their FW 2023 collection their most sophisticated yet. All designs combine club culture with high fashion and unite self-confidence, sex appeal and coolness. As a result, they not only correspond to the fashionable philosophy of NAMILIA: They are uncompromising, feminist, anti-racist and pro-trans. They stand for sexual freedom and celebrate the uniqueness of everyone.

Nan Li and Emilia Pfohl found inspiration this season in motocross. Starting with the color palette, which is dominated by black and broken up by signal colors such as neon orange, neon yellow and strong blue, the silhouettes also have their roots in racing and progressively play with volume. Extremes meet, such as wide and high-cut overknees, pleated mini skirts, cropped tops, XXL coats and tight-fitting overalls. There are also gothic and punk details, such as pointed shoulders, spikes or rivets. In addition to vegan leather, stretch mesh and faux fur, the designers use various high-tech materials known from performance sportswear. Their goal: to create functional and resilient fashion for eternity.

The NAMILIA X NFS Capsule Collection is also part of the collection this season. This was created in cooperation with EA Games for the latest version of the cult game “Need for Speed”, called “Unbound”. Players can not only wear all looks virtually, but the twelve-piece collection will be available physically immediately after the show.

“At Dusk” is the name of Olivia Ballard’s FW 2023 collection. The title of her runway show also reveals her inspiration: Dusk, which represents a fascinating in-between state for the designer. In the transition from light to darkness, we humans like to slip into comfortable, familiar clothing, we shift down a gear, leave the day behind us and prepare for the night.

With “At Dusk”, Olivia Ballard reflects this condition. She fashionably blurs the threshold from day to night and plays with the aesthetics of these evening rituals in her collection: from slip dresses to evening dresses. From comfortwear that we would only wear at home to to club couture.
A special focus is now again on sustainability, so all looks were created partly from recycled silk fabrics, revived old nightgowns or Lycra and mesh remnants from her own archive. Through her carefully selected materials, Olivia Ballard explores how the body can bring shape, life and individuality to each of her looks. Her designs not only symbolize different identities, but also continuously question our societal beauty standards and consumer behavior. As a young, integrative brand, this season all designs are intended for all genders, all bodies and all ages.

Her runway show took place at MaHalla’s Black Hall. For Olivia Ballard, the striking building in the middle of a historic industrial area in Schöneweide embodies a dark tension between an intimate presentation and a feeling of belonging. “At Dusk” was accompanied by up-and-coming contemporary solo artist Saint Precious and a soundscape by Dawud (Psssh Records). Filip Setmanuk, a Berlin-based CGI artist who creates virtual worlds using video game engines, digitally designs the show.