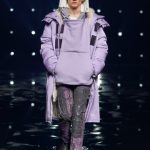 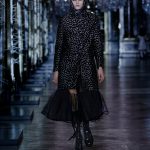 75 years ago, after the incredible triumph of his house’s first couture presentation, what did Pierre Balmain do?

He packed up his bags and started traveling.

He jetted off to America, not to talk about collections, but instead, following the directive of his friend Gertrude Stein, to act as a roving ambassador, criss-crossing the entire United States to deliver lectures on French culture and savoir-faire. He also jumped across the Channel, transporting his fresh new feminine take on couture to London, six years after the war had abruptly put an end to all imports of Parisian fashion. And, after an eight-day, multi- stop series of flights across half the globe, he touched down in Australia, bringing news of his “New French Style” to Down Under (and, of course, making sure to include a visit to the Sydney suburb of Balmain).

Now, post-2020, it’s a whole lot easier for us to appreciate just how exciting those trips must have been for Pierre Balmain. After the anxious years of war and occupation, he was suddenly being offered the long-denied possibility of escaping to destinations that he had been dreaming about for years—and it must have felt incredible.

Today’s video and men’s and women’s collections aim to channel that amazing sensation of freedom. We remember the impressive power of travel to open minds, uplift spirits and reunite those who have been kept apart, as we all look forward to soon-to-arrive better days.

Many of our designs riff on the distinctive beauty found in the uniforms of early pilots and astronauts, with takes on parachute dresses, lace-up flight boots, bomber jackets and shimmering anti-g jumpsuits. One particularly striking design relies on over 68 thousand upcycled Swarovski crystals, making very clear our atelier’s success in mixing luxury embellishments with these aviator inspirations.

As you’d expect, accessories form an important part of this collection—exactly as they do in actual trips—with a wide range of new offerings from the house. The many soft and structured carry-ons are covered with a dazzling array of color and fabric plays on Balmain’s recently relaunched Labyrinth print, and there are many clever takes on bags that look to compasses, paper airplanes and even travel neck pillows for inspiration.

And I’m sure that you’ve noticed the attitude. Balmain is Parisian, so there’s always a touch of this city’s signature insouciance in every one of our designs—but Fall 2021’s referencing of the daring audaciousness of flight pioneers seems to have somehow magnified that familiar spirit. We also, of course, look back to the glamour of mid-century travel—something that is clearly reflected in the sleek lines of our new ELY 64-83 collection (named for the house’s original telephone exchange: ELYsées 64-83, which also lent its name to Balmain’s first perfume). That range, inspired by an early ‘70s Pierre Balmain design, recalls the chic and feminine silhouettes that our founder relied on, as he and a handful of other young talents ushered in Paris’ historic post-war fashion renaissance.

Valentin Petit and his team shot today’s video inside Air France’s impressive hangars, where aeronautical and technological expertise make possible the elegant beauty of flight—just as the skills of our Parisian atelier allow Balmain runways to soar. Saluting that shared exceptional devotion to excellence, many of our artisans’ intricate embroideries were inspired by the wiring, construction and mechanics of the sleek planes and engines that play key roles in today’s film.

Finally, I insisted on pushing the envelope a bit for our Fall 2021 video—because today, as we move forward, we need to always dream big, remain optimistic and consider all possibilities. So, the moon forms not just a beautiful backdrop for this video, but also a promise—as Balmain looks ahead to the house’s future lunar runways.