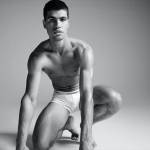 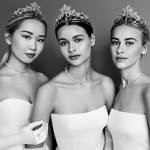 For this Pre-Fall, the house of Balmain has been inspired by some of Monsieur Balmain’s strongest designs from the ‘60s and ‘70s. That was, of course, an incredible moment for Parisian fashion. Thanks to Pierre Balmain’s fresh New French Style and a mix of other original ideas from a handful of other French couturiers, Paris had been restored to its position as the undisputed capital of the fashion world. Not content to simply rest on their laurels, Balmain and other couturiers continued to push forward in bold directions, reflecting the societal revolutions taking place around them, as well as the abundance of opportunities, inspirations and techniques that les trente glorieuses had made possible. In addition, Balmain and other Parisian houses were just beginning their experimentation with the liberating possibilities of prêt-a-porter, helping to open fashion up to a new, younger audience.

As always, this collection highlights familiar codes of this house, including striking black-and- white pairings, strict Parisian tailoring and a host of plays on Balmain’s iconic golden buttons.  They’ve also riffed on Monsieur Balmain’s love of brooches and bows, exaggerating those embellishments up to the point where adornments have been transformed into the center of designs. The many classic patterns that they spotted inside their mid-century archives— houndstooth, Prince of Wales, chevrons—have been updated, as well, creating very modern and luxe spins on those old-school motifs. They’ve particularly enjoyed highlighting Pierre Balmain’s graphic genius, reinterpreting some particularly compelling logo treatments that were originally splashed across house accessories fifty or sixty years ago. Those graphics move easily from updated scarf dresses to the series of chic sport ensembles that look to Balmain ski designs from the same period.

THE SWAROVSKI TIARA BRINGS SPARKLE TO THE VIENNA OPERA BALL 2023